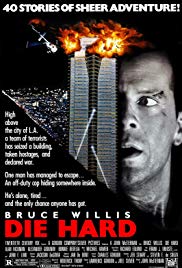 An NYPD officer tries to save his wife and several others taken hostage by German terrorists during a Christmas party at the Nakatomi Plaza in Los Angeles.

Nine million terrorists in the world
and I gotta kill one with feet smaller than my sister.

Well, what else can I say besides that this is “THE” (Can I stress it more?) action movie from the ’80s with a young Bruce Willis. I can’t even remember anymore how many times I’ve seen this movie. “Die Hard” remains an example to all action movies that followed in the years after it. At that time you had the Sly and Arnie action movies. But these were more a demonstration of brutal violence, using their impressive muscles and a sense of invincibility. Bruce, however, was a clever, shrewd, tough action hero (with funny oneliners), who can take a beating, but on the other hand, shows that he’s not completely invincible.

Of course, the action in films nowadays is much bigger, more impressive and mind-blowing, but the strength of this film is the story, the accumulated tension, lightness and the dry humor of Bruce Willis. From the first minute he takes you in his grip, and he won’t let loose. You can see him slowly evolve from a wrinkle-free clean-shaven top cop into a reasonably damaged hero. This pattern keeps coming back in the next two parts, which are also top movies of the same caliber.

You’ll notice this is already an old movie because, for instance, lighting a cigarette in a public place isn’t prohibited. But the way action scenes are visualized, is still top-notch work and should be the aiming point of many other action flicks. At least when their goal is to be a successful action movie.

I think the sudden confrontation between Gruber and McClane is one of the strongest scenes in this film, along with the well known “Yippie-kay-yee” cry. Trademark of Willis. The fact he likes the character of McClane a lot, you see clearly in “The Last boy scout“. In that movie, he plays a washed-up detective with the same coolness and cynical, dry humor as McClane. Too bad that in the last two “Die Hard” movies, McClane is only a shadow of himself compared to the original movie.

“Die Hard” is one of those rarities in movieland, which you can watch without thinking “Pfft Again this movie“. It remains, for me, a joy to watch.