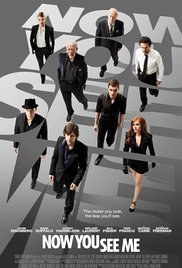 An F.B.I. Agent and an Interpol Detective track a team of illusionists who pull off bank heists during their performances, and reward their audiences with the money.

This movie was for me one big magic trick. Like many, I thought the beginning of this film was great. The presentation of the “Four Horsemen” was well done. Especially Woody Harrelson was brilliant as a mentalist. His humor is natural and doesn’t feel like forced or exaggerated. I find him irresistible in this role as a shrewd and highly intellectual lettered psychic illusionist.

Jesse Eisenberg has that natural arrogance of which I sometimes doubt whether this is played or it’s his personality in real life. Isla Fisher and Dave Franco ensure the beauty portion of the film. The interplay of the four characters and the interactions between them was quite entertaining and frequently enormously funny.

Dylan (Mark Ruffalo) and Alma (Mélanie Laurent), respectively the FBI and Interpol, the Scully and Mulder of this film, played a very fine part. Michael Caine, the wealthy guardian of the foursome plays a limited role. And Morgan Freeman was again the mysterious ex-magician whose lifework is to unmask the 4 magicians. These are the main characters what the story is about. The performances were magnificent. My favorite scene is the one where they all were arrested after the first performance. The conversations, the ascendancy that they showed, the arrogance, and the magic they used. Admirable beautiful.

The illusions were of course exaggerated and improbable but were a magnificent spectacle that was masterfully visualized. The sparse action scenes were worked out to the last detail and at times convincingly realistic. And sometimes these action scenes are ridiculously exaggerated. But yes, it’s still a movie about illusionists. Right? Where did it go wrong then? The denouement! It’s truly a total surprise, but at the same time so far fetched that it was implausible. Anyone who had seen it coming, better start a hobby in making bedspreads because all the other movies will be extremely predictable for you, I guess. For me, this was a total letdown. A great movie with a magnificent run, a loving captivated middle, and then such a weak denouement.