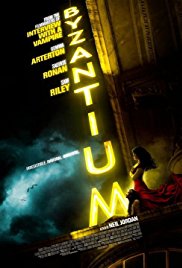 Two mysterious women seek refuge in a run-down coastal resort. Clara meets lonely Noel, who provides shelter in his deserted guesthouse, Byzantium. Schoolgirl Eleanor befriends Frank and tells him their lethal secret. They were born 200 years ago and survive on human blood. As knowledge of their secret spreads, their past catches up on them with deathly consequence.

I write of what I cannot speak, the truth.
I write all I know of it, then I throw that pages to the wind, maybe the birds can read it.

A non-traditional approach to the vampire genre. A new refreshing look from a different angle. Not the stereotypical image of pale creatures of the night provided with bloodshot eyes and sharp teeth hiding in dusty basements in a coffin. No melting, burning, or imploding is involved when they are exposed to sunlight. No, here we have persons who are part of an alliance and inherited a centuries-old tradition.

It’s the story of a mother (Gemma Arterton) and her daughter Eleanor (Saoirse Ronan) who have been hiding for years because women actually aren’t allowed in the alliance. And let me tell you, I’ll gladly surrender myself to Gemma the female vampire so she can catch me and plant her teeth (in this case the sharp nails) in my flesh. Immediately she made ​​me think of the pulp booklets of “Vampirella” that used to lay in the newsstand. Same proportions and dimensions of lustful flesh.

Once again Saoirse Ronan plays a convincing and brilliant part (recently I’ve seen her in “Hanna“) as the daughter with scruples and who’ll sacrifice anything in order to tell her secret to a mortal instead of scribbling it down on a paper and then throw it away. Not only she looks stunning, but she also has that serene look and empathy to interpret this role in a sublime way.

The used footage is magnificent. Marvelous images of the coast, interspersed with flashbacks to the 1900s. Slowly the whole story unravels. The denouement of the alliance was not so obvious but the end with Darvell on the island together with Eleanor wasn’t exactly a surprise.

For me, the movie was, how appropriate, drop-dead gorgeous.