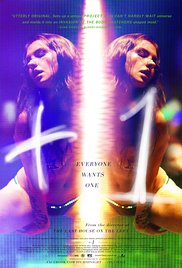 Three school friends are present at the biggest party of the year where a mysterious phenomenon manifests and soon chaos erupts. Their friendship is tested, and the only thing left is their attempt to survive the night.

You’re all right man! Not like Teddy! He’s a dick juicer!

After an hour I was hoping that at home the lights also began to flicker and my alter ego would appear to turn off this movie. This is an extremely tedious and immensely boring movie. More than an hour you’ll be watching at a probably glitzy rave with thumping bass and teenagers getting drunk. Teen girls who see themselves as goddesses and think they look even more divine than the others. After a while it was a bit too much for me. It looked like “Groundhog Day” except that after this time leap a look-alike showed up. The story was completely pointless and not at all interesting.

An innocent stupid kiss is the beginning of the whole mess. After that there’s some kind of impact. I thought it was a comet or so, but eventually it will be some kind of alien life form ! That’s also something that bothered me about this movie. You don’t have a freaking idea what’s going on or what’s the cause of the phenomenon. And in the end I still didn’t have a clue.

Before you know it, all the protagonists are at a house party where you can admire irritant teens just hopping around and stumble over each other. David (Rhys Wakefield) is the sucker that actually just wanders around at that party the whole time, looking for his girlfriend Jill (Ashley Hinshaw) so he can apologize for the mistake he made. And this process takes the whole movie ! Sigh.

In fact, I think he sometimes looks very bleak. First he has that dazed look. Then an obviously winning smile. And after that a crazy angry look. In “The Purge“, this worked cause he played a psychologically unstable character. If some nudity is a reason for you to rate this movie, then you will appreciate “+1”, because Melanie surely is eye-candy. Especially when her double stands next to her as well! The time jumps are approaching more and more real time, but the party goes on. A game of tennis played with a fireball sets a few curtains on fire. No need to worry cause the sprinkler system comes to the rescue. The lighted tennis ball was a nasty bad SE.

The climax is the moment everybody is locked up with his alter ego in a summerhouse. I’m still wondering how that whole gang, first standing in front of the stage, got in that little shed. That was a bit cramming.  An awful and ridiculously simple story. This movie is only for teenagers who don’t know or appreciate the words quality and sensible.

Eventually I hope I will never experience a time jump that brings me back to where I started watching this movie.