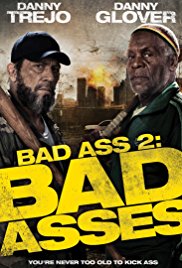 Frank Vega teams up with grumpy old agoraphobic Bernie Pope to kick ass and clean up the streets of L.A.

I’d rather you stick a needle in my eye than insult me.

My God,  this was a terribly bad movie. Regardless of whether you are to assume that this is really nothing more than a bad B-action movie and you definitely shouldn’t take this too seriously, I think it is a monstrosity of a movie. Terrible acting (even Danny Glover‘s acting was dreadful), bad fight scenes, incredibly old SE’s and such mindless humor that even a laugh track wouldn’t work. However, what can be expected from someone who has films directed with titles such as “Saving Ryan’s Privates“, “The 41 -Year- Old Virgin Who Knocked Up Sarah Marshall and Felt Superbad About It” and “30 Nights of Paranormal Activity with the Devil Inside the Girl with the Dragon Tattoo“. I have a feeling Craig Moss used more energy and creativity on devising this film titles than in creating it. The involvement of Danny Trejo in here is also an indication that this won’t be a high-quality movie. When you look at his filmography, however, you can only have respect for the man. Is there actually a movie he hasn’t played in? There are 18 movies in post-production with him at this time. Amazing!

I just wanted to see Danny Glover once again.

I haven’t seen “Bad Ass” myself (and I probably won’t anyway). The only reason I wanted to watch this one is the fact that Danny Glover starred in it. It seemed like an attempt to make a follow up of “Lethal Weapon“. The things which made “Lethal Weapon” so unique and entertaining, was missing here. No flashy action, no humor and no infectious interaction between the two protagonists. I suppose that the beginning was an excerpt from “Bad Ass” where we witness how Frank Vega (Danny Trejo) teaches a duo of skinheads a lesson. Apparently, this is enough to make him a local hero and even an honorary member of the police. Vega has a gym and the emerging star Manny has a not so healthy job on the side, namely trading drugs. One evening he’s killed by the head of the drug gang. Vega is determined with the help of Bernie (Danny Glover), after Manny’s mother begging, to take revenge on this gang for the death of his pupil who he treated as his own son.

The script is as predictable as it can get. You know where it’s going and how it will end. If they have deliberately created this film as a humorous pulp action movie then I would understand. But I fear that it was meant to be a serious movie. The commitment of a veteran to give a group of problem children a future and a vision. But unfortunately, it became an unlikely story. The funniest thing in this film was the farts of Glover.

Now some things that really annoyed me. Danny Glover, an old man who shambles around all day with a phobia so he’s afraid to leave his shop and who also has liver disease, suddenly jumps to the rescue and swings around with a hockey stick as if he’s a reborn Bruce Lee. I’m convinced that if you get an ice pick shoved in your eye, you won’t be walking around moments later in a good mood with just an eye patch. The chance that you can throw a hand grenade from a speeding jeep in a flying helicopter after which the latter blows up (with an incredibly ugly looking explosion) is minuscule. And as always, the gang members armed with automatic rifles still stand there frightfully waving those guns around while the police drive up with the sirens blaring. They stand there with such an air like “Ok, I see that they are coming, but I persist on being tough“. And the incredibly delicious looking mother of Manny falls for Vega. Incomprehensible!

I had a vision of 70’s television serials like “The A-Team” when watching this movie. So terribly old-fashioned. Just that this 70’s-80’s serials looked far better than this movie.