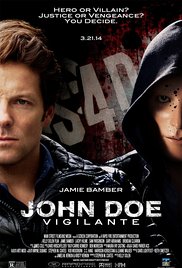 Some call him a hero. Some call him a villain. He's "John Doe: Vigilante" - an ordinary man who decides to take the law into his own hands. Frustrated with a failing legal system that continues to allow violent criminals to go free, John Doe begins exacting justice the only way he knows how - by killing one criminal at a time. Soon he becomes a media sensation and inspires a group of copycat vigilantes, but who is the real John Doe - a pillar of justice or a cold-blooded murderer? You decide.

Killing is easy.
It’s living with it that’s the hard part.

John Doe is a modern Robin Hood. But instead of returning stolen money to the poor, he brings criminals to justice. And this at the request of relatives of someone who was a victim of a crime. “John Doe: Vigilante” is an indictment of the failing justice system and the apparent impunity of criminals who slip through the cracks of the judicial system. A person, therefore, takes the law into his own hands and begins a series of murders on criminals who got a second chance to return to society, but ultimately continue with their criminal activities. The line between revenge and the pleasure to kill fades as the film progresses.

Don’t expect a “Silence of the Lambs” or “The Zodiac”. This Australian thriller is far from exciting. It’s a series of excerpts from the courtroom, an exclusive interview with the consent of John Doe (Jamie Bamber) conducted by journalist Ken Rutherford (Lachy Hulme) and video recordings of the different executions. It rather looks like a television documentary than a film. The end result is a slow and boring movie with an unmistakable message.

Whether it’s advisable in order to proclaim that message in this way, is another question. What if certain individuals start applying this message in reality? You can ask the same question when it’s about other movies, of course. The difference is that this film feels really realistic with this documentary-like packaging. There is even a Facebook group that posts messages about “vigilantes” who perform heroic deeds and about errors made by the court. Like for example a judge who sentenced a rich guy to probation after his conviction for the rape of his three-year-old daughter, because he wouldn’t fare well in prison. After reading this nonsense I wanted to become a vigilante myself!

Jamie Bamber plays the role of John Doe in a convincing way. It’s wonderful to see how he plays that charismatic figure who firmly believes in the ultimate goal of his one-man operation. During the interview with the journalist, his moods fluctuate constantly from determined and intellectually, to melancholic gloating about his actions and then again full of anger because of the injustice that was done to him. The reason for this revenge is that his personal family life was completely destroyed by the murder of his daughter and the death of his beloved wife who couldn’t cope with this tragic loss. It’s a justified act of vengeance against all offenders who are guilty of pedophilia, rape, child neglect and abuse of women.

Lachy Hulme personifies the journalist who tackles this story with both hands and interrogates witnesses, after which he confronts John Doe with these facts in order to prove to him that taking the law into his own hands is not to condone. He tries to find out if John Doe is now operating on his own or in cooperation with allies such as the founder of the group “Speak for the Dead” Murray Wills (Sam Parsonson) or the over-enthusiastic news reporter Sam Foley (Gary Abrahams) who’s only too happy to broadcast the video of John Doe’s actions since all the major stations refused to do that.

There were two moments of brilliant acting in this film that I want to mention. The first is a subtle trifle that I’ve noticed. The moment Rutherford asks Foley whether he would do anything for John Doe, even kill someone, for a moment there’s that tiny smile before he gives the answer “I’ve never said that.” And the metamorphosis from a pathetic backstabber to a sadistic insensitive person, portrayed by the killer of John Doe’s daughter.

In the end, it’s a dull action-less movie.

For me, “John Doe:Vigilante” was a dull action-less movie with a few cold blooded murders on tape. It’s a controversial issue that’s raised and it leaves you thinking about how you would react if such a disaster strikes and you find yourself in a similar situation. I admit that I wouldn’t care if someone like John Doe would arise, killing perpetrators of such despicable crimes. “An eye for an eye, a tooth for a tooth” situation. It’s the principle of the film “The Purge” extended into a continuing process whereby the eradication of lowlifes is unpunished and tolerated. The only and always recurrent problem is the line that needs to be drawn in such a process . Who decides whether someone has hurt someone else unintentionally or not? Is someone who drove through a red light and could have made a victim, a candidate for the black list ?

The final question that remains is whether John Doe operated on his own or whether it was indeed a masterly put together plan with fellow thinkers. “John Doe: Vigilante” :  a movie to rack one’s brain and to do some deep thinking about this thorny issue. Can you justify violence? Who judges about what is right and what is wrong? And why does the current legal system fail? It’s not a movie to watch on an intimate date. That’s a certainty !