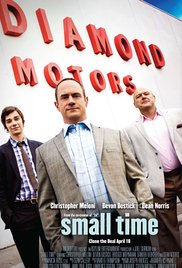 A young guy decides to skip college in favor of joining his father on the lot of his used-car business.

This is the story about my father and the summer we spent together many years ago.
It was the summer that changed my life.

When using the above quote in a movie (or even worse, it’s spoken by a voiceover) you expect a corny story with a moral character about a generation conflict between adolescents and their parents. However, don’t expect too much drama in “Small time” because it’s not that dramatic. To my surprise, I thought it was a pleasant film to watch anyway. At times it was quite funny and entertaining. Granted, they’ve indeed incorporated a moral in it. Let’s just say it’s a void story about the necessity of young people to listen to their parents when it’s about significant life lessons. Eventually, those parents only wish the best for their children and in the end, they surely can help their unruly adolescents with their “taken from life” wise advice.

Al Klein (Christopher Meloni) and Barbara (Bridget Moynahan), a divorced couple, are being faced with the decision of their son Freddy (Devon Bostick) who no longer wants to go to school. Instead of his pants getting worn out by sitting at a school desk, he wants to follow in his father’s footsteps as a salesman. Al Klein is a second-hand car dealer and runs a business together with his partner Ash Martini (Dean “Under the Dome” Norris). It wasn’t exactly a lucrative enterprise in the beginning. And that’s something Barbara didn’t appreciate very much. The uncertainty and financial instability made her decide to turn her back on Al and start a new life with her former boss Chick (Xander Berkeley). The decision made now by Freddy creates a bit of tension between the two. Freddy probably had a rose-tinted view about it, but the start in his father’s business isn’t as easy going as he thought it would be. The first contacts with customers are rather stiff and ultimately we see a somewhat pathetic little person who’s being  ignored. But his self-confidence grows and he evolves into a slick salesman. The fact there’s also a tad rudeness in play and Freddy’s interacting disrespectful with others is a thorn in Al’s side.

Small Time” is a typical weekend movie that wouldn’t be noticed in the programming of some television channels. It’s such a pedantic film that could perfectly serve as filler for an evangelistic broadcasting. That doesn’t mean that this is an awfully bad movie. To be honest it was pretty entertaining thanks to the chemistry between Al and Ash. The way they apply their selling techniques to persuade customers to buy the car they were interested in, is a joy to watch (I never thought that a hearing aid would be a good attribute for this). They are two crafty salesmen who have developed a well-oiled collaboration over the years. It wouldn’t surprise me if the author of the book “How to sell your mother in law” asked for advice from these two slick salesmen. Only Al thinks certain standards are vital as having respect for both the customer and those who work for you. And that’s something that Freddy lacks at times.

The only thing that bothered me, was the used clichés in this film. But especially Freddy’s abrupt transformation from a rookie without experience into a seasoned seller, I found a bit exaggerated and improbable. Don’t expect an overwhelming message or a breathtaking ending. The only thing noteworthy to mention also is the small contribution by Amaury Nolasco as the Spanish-speaking mechanic. You see him quickly taking off his work clothes after which he appears in a flashy costume, so he can help out with a sale with Spanish-speaking customers. Only that fragment made it worthwhile to watch the film.