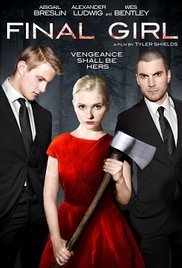 A psychological thriller about a beautiful teen girl new to town who is lured out to the woods by a group of senior boys to be the victim in their final initiation. Taught by her trainer, William, to be a lethal weapon, she turns the hunters into the hunted with a level of perversity far beyond anything they could have ever imagined.

Are you guys an A-Cappella group?
Something like that.
Naw, we don’t sing together.
You should.

After reading the content of “Final Girl“, you would expect a “I spit on your grave” -stylish revenge film in which a young woman teaches a group of young teens, who developed a rather morbid hobby during the weekends, a lesson. In hindsight, you can say it’s at least disappointing. The reprisals are quite soft, lacking any kind of excitement. The whole movie sometimes has a cartoonish 60’s look with some absurd scenes which sometimes even reminded me of “A Clockwork Orange” (not in terms of story but pure when it’s about the mood).

Abigail Breslin, such a ravishing appearance.

I surely would recommend anyone to give this movie a chance, just because of the presence of Abigail Breslin. What a ravishing appearance, this young lady. A natural beauty provided with a fragile appearance and a pale face of an angel. You wouldn’t immediately think that she’s a trained killing machine without conscience. And that’s also my first remark. She wasn’t really convincing as such. She didn’t seem to be really invincible during the confrontations. It’s an excellent actress beyond dispute. I saw her the first time in “Wicked blood” and I was pleasantly surprised. She made me think of Saoirse Ronan at that moment. The same innocent look, determination and overwhelming calmness. However, I am convinced that Ronan would perhaps have been a better choice here. Not that there’s anything wrong with the acting of Breslin. She demonstrates that also in “Maggie” afterwards (also with a pale face of an angel. But in “Maggie” there’s another cause).

The biggest advantage of this film is the short playing time. I guess this is caused by the simple story. In only 15 minutes you’ll get the full story already served. First, the brief conversation that the mysterious Wes Bentley has with the very young Veronica where he tells her that her parents are no longer alive and that he wants to train her to perform special tasks. Then we see something that should resemble a brief overview of that education. And finally the gang of tastefully dressed guys who lure an innocent blonde. Actually, this is the whole story in a nutshell and how it’ll continue is rather obvious and predictable.

If it was the intention to make a stylistic slasher out of it, the creators of this film certainly succeeded in that. Some pieces look as if you’re watching some dramatic play. Are you expecting a slasher like “You’re next” then I recommend you watch that one instead, because the ultimate retaliations are quite austere and bloodless. Even avid supporters of “The Sound of Music” can watch this film without risking to faint. And the lack of background information isn’t exactly a plus. A bit of explanation about the mysterious death of Veronica’s parents, the origin of the unknown teacher and the reason for the bizarre behavior of the four teenagers, would have been a useful contribution.

Besides the outstanding performances of Breslin and Bentley (and Logan Huffman as the pretty crazy looking figure Danny) this was still a mediocre movie. Even “Little Red Riding Hood” is more frightening than this retro story. However, the premise was interesting (but certainly not innovative) enough to make something exciting out of it. And what totally bugged me, were the piercing light beams used in the woods. It made for some impressive images with shadow play, but after a while it was as annoying as a mosquito in your bedroom on a balmy summer evening. I’m filing this one without delay under the heading “Missed opportunities”.