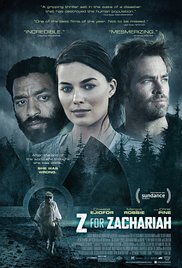 In the wake of a disaster that wipes out most of civilization, two men and a young woman find themselves in an emotionally charged love triangle as the last known survivors.

It’s about… rebuilding.
Maybe God… or your father… put this here for us.
So we can… we can start again.
Maybe that’s why we’re here… Just to start again.

The future prospects of our beloved world looks rather bleak, judging by the post-apocalyptic films of recent years. The endless series of disaster scenarios doesn’t bode well. “The Maze Runner“, “Divergent“, “Mad Max“, “Oblivion“, “The Hunger Games“, “Snowpiercer“, “Automata“, “How I live now“, “World War Z“, “The Well” … they all show a society that recovers on the ruins of a previous calamity. Similarly, “Z for Zachariah“. You won’t get a real explanation about the incident that led to a general extermination of our society. Reference is made to radioactivity and emerging nausea caused by polluted water. From this you can deduce that there might have been a nuclear war or accident in the past. But otherwise it is pure guesswork.

It all started in an interesting way. A sober story with a sole survivor in a fertile valley (a “Garden of Eden” as it were), that was spared from the global holocaust one way or another. But this soberness gradually morphed into dullness. The emphasis gradually shifted from the apocalypse that took place in the world, to the complex, apocalyptic emotional world of a few surviving individuals. A love triangle is formed with reconstruction, religion, racial discrimination and jealousy as central themes. The fact that in all probability the world population was wiped out by a disaster, is relegated to the background and is only mentioned briefly afterwards as if it’s irrelevant. What remains is an ordinary but complicated love story.

I came across the following perspicacious summary : “Z for Zachariah is a sex movie with a science-fiction coating and barely any sex.“. It can easily be added to the list where films such as “The Boy” and “Manglehorn” appear in. Painfully slow films. What remains are the acting performances. An advantage (and maybe disadvantage at the same time) are the number of main characters. It’s limited to three. Margot Robbie as the devout, farmer’s daughter Ann Burden, who can drive a tractor to work the land without any problem but on the other hand feels rather inconvenient when it comes to intimate relations with someone of the male gender. Margot Robbie is a ravishing appearance as seen in “Focus“, “Suite française“, “The Wolf of Wall Street” and “About time“. Despite her fairly pathetic and bigoted look in this film, her natural beauty is still striking. She’s joined by Chiwetel “12 Years a Slave” Ejiofor as the scientist John Loomis who is being rescued from a certain death by Ann after taking a refreshing bath in a toxic pond. The group is completed with Chris Pine as the not so bad-looking miner Caleb. He thwarts John’s plans to re-populate the planet thoroughly.

I’m not going to read book either.

This film is based on the novella by Robert C. O’Brien from 1974. I myself haven’t read it and allegedly the film isn’t really consistent with the book. For example, there would be no question of a third person. Knowing this, I think I’ll let this book pass me, for even three people can’t ensure that there’s an intriguing, fascinating story. Let alone two. “Z for Zachariah” is a science fiction without much fiction, an erotically charged tale without eroticism and a pseudo-emotional story. Despite the nuclear disaster, the chemistry between the characters was hard to find.