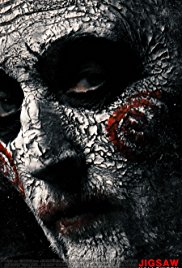 Bodies are turning up around the city, each having met a uniquely gruesome demise. As the investigation proceeds, evidence points to one suspect: John Kramer, the man known as Jigsaw, who has been dead for over 10 years.

“Salvation can be yours, if you cleanse yourselves of the habitual lies which have brought you here.
Lies that you have told yourselves, lies that have brutalized others.
Confess.
The truth will set you free.”

When watching a YouTube video where a baseball hits someone with a dizzying speed right in the spot that’s used to take care of having an offspring, I sometimes unwittingly make an ouch-sound and wince. That’s what I had when watching the first “Saw” films. Not with this new episode from the “Saw” saga. The original film is phenomenal and without a doubt the best thing to see in the field of torture films. Both physically and psychologically. Perhaps the fact that this pioneering horror was directed by star director James Wan helped a bit. A nervous and exciting storyline with extreme forms of physical violence. Each time, the victims are driven to set their pain bar a bit higher, so they can regain their freedom.

The more gory, the better.

To be honest, I only saw the first three movies of this sinister serie. Not because my stomach couldn’t stand it anymore, but because it was repetitive and something was missing. The cleverly made story was gradually pushed to the background and replaced by gore-looking killings. The more disgusting and sadistic, the better. Regardless whether the story makes sense or not. I really didn’t feel like watching a modern “De Sade” story. To my surprise, I found out they’ve made already seven episodes from “Saw“. About time to see, after so many years, if this comeback is worth a watch or not.

You won’t feel nauseous when watching this horror.

The first thing I noticed was the softness of the film. Okay, you’ll see some bloody fragments (a half sawn off head for instance), but eventually it all looks pretty civilized. In the first “Saw” films, the torture practices of not so innocent victims, were portrayed fairly explicitly and sometimes very distasteful (just think of the fragment with the “Pig vat” trap). In “JigSaw” the shock effect isn’t the most important aspect. Here it’s the created myth about the person John Kramer. Whether he’s dead or not.

Actually, I didn’t care whether the legendary John Kramer resurrected from the grave or not. But despite the feeling that it was yet another way of exploiting a successful franchise and simply a recycling of the same groundbreaking concept without pushing any boundaries, it wasn’t so bad afterall. “Saw” was inventive on a creative level. But on the other hand, if you’ve seen one, you’ve seen them all. The only thing you are looking forward to while watching this movie, are the ultra-violent and bloody murders tht are preceded by a terrible dilemma for the victims. Torment themselves or face a terrible death. “Jigsaw” is worth a watch. But I think I’ll skip any future sequel. At a certain moment, it’ll just become more boring and more uninspiring.