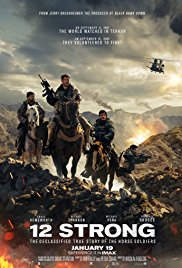 12 Strong tells the story of the first Special Forces team deployed to Afghanistan after 9/11; under the leadership of a new captain, the team must work with an Afghan warlord to take down the Taliban.

This is Afghanistan.
Graveyard of many empires.
Today you are our friend,tomorrow you are our enemy.
It won’t be any different for you.
Soon America will become just another tribe here.
You will be cowards if you leave.
And you will be our enemies if you stay.

I only asked myself one question, after seeing “12 Strong“. Why didn’t the American authorities send 1200 of those well-trained, experienced soldiers instead of this limited group of 12? Then in one fell swoop, they could have wiped out the entire Taliban and the scum that belongs to it. Now after more than 15 years, the American troops are still there and the living conditions and the political situation hasn’t improved much. I can believe that these 12 elite soldiers have made a breakthrough in the fight against the Taliban there. That the entire film is based on true facts, I also want to believe. But I think that the event between dropping these soldiers and their homecoming should be taken with a fat grain of salt. It felt like a superhero movie at certain moments and it’s the textbook example of displaying American patriotism. The latter a bit too much for my taste.

Any idea how many Taliban fighters these 12 super-elite soldiers had a clear shot at? And how many were eventually sent to the afterlife, where they are awaited for by a harem of virgins, with a well-aimed shot? I lost count after a while. I’m sure that the automatic rifles of the American soldiers were equipped with an auto-aim function because the number of headshots was shockingly high. I suppose the Taliban fighters were equipped with obsolete Soviet arms or weapons from other parts of the world because their shooting skills left much to be desired. Or perhaps they had desert sand in the eyes. Or the American soldiers chose a perfect time to attack. Maybe these Muslim warriors were attacked the moment they rolled out their Persian carpet and knelt down towards Mecca for their prayers. I don’t have another explanation. Either that or they are just extremely bad at shooting.

Fighting against tanks with horses. Now that’s something different.

I did admire these elite soldiers because they had to move on horseback through this country. Nothing special, you might say. But not when you find out only one person has experience in this discipline. It’s surprising no one fell off an Afghan ridge. They also had an additional obstacle. Not only did the local warlords such as Dostum (David Negahban) thoroughly hate the Taliban regime. There was also the mutual rivalry between the various Afghan warlords. Afghans apparently all have a short fuse (stressful for suicide terrorists). However, I don’t understand how they knew at a given moment who they should shoot at, because those Muslim fighters all look identical. “12 Strong” is a war film like so many others. Apart from the fact that they go to battle on horses against a force majeure with a hypermodern weapon arsenal. This gives us impressive but at the same time dubious images. It looked like “The magnificent seven” mixed with “Hacksaw Ridge“.

Nothing will stop the chaos as long as money is involved.

The honor of being the captain of these elite troops was given to Chris Hemsworth, who played it with bravado and conviction. Mitch Nelson is an officer without war experience but with a charisma and intellect that ensures that this impossible operation is fully successful. He manages to convince a general after he interrupted him several times during his briefing (apparently this is not done in the US Army). And he manages to persuade an Afghan warlord in a decisive manner so he forgets a year-long feud for a short time and buries the battle ax briefly. “12 Strong” is certainly exciting, contains a whole series of action-packed scenes and shows in a clear way how chaotic the political situation in that country is. My personal opinion about the whole problem is of a very different nature. And many will disagree with it. Let me put it this way. I am convinced that as long as there is money to be earned from these sad conflicts, with ordinary and innocent people being the victims, these tragic conflicts won’t stop and nothing will change. Viola, my two cents.