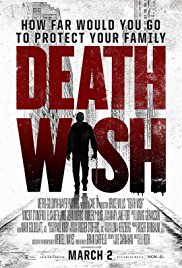 Dr. Paul Kersey is an experienced trauma surgeon, a man who has spent his life saving lives. After an attack on his family, Paul embarks on his own mission for justice.

My opinion on “Death Wish”

“We’ll get you set up with your FOID application right here today.
State Police send it pretty quick.
And then you’ll just have to take a gun safety class, but don’t worry, no one ever fails.
You can do that anytime within 30 days of the time period you’re waiting for your city permit.
And then it’s just 72 hours, and you’re locked, and ready to rock.”

Should I take the risk and watch a Bruce Willis movie again? All the previous films with this action hero were almost one by one (with the exception of “Once upon a time in Venice“) sources of annoyance in which Bruce acted uninspired and without enthusiasm. I’m sure his facial expression showed more enthusiasm when he looked at his paycheck. But I thought, let’s just bite the bullet and get this over with. And to be honest, this remake of “Death Wish” wasn’t so bad. It’s not possible for me to compare this movie with the series of films from the 70s and 80s with the legendary Charles Bronson, because I just can’t remember ever having seen one of them. Maybe Bruce Willis is a kind of icon in Hollywood. But compared to Charles Bronson, he’s just a teeny, tiny icon.

There’s one thing he doesn’t show here. And that’s the lack of enthusiasm. I only had the impression that the part of Paul Kersey wasn’t really written for him. It felt a little weird to see someone like Bruce Willis acting as a top surgeon who transforms into an angel of revenge, but shows total clumsiness and amateurism when it comes to handling firearms. While he has a past as a tough crime fighter who isn’t afraid of harsh confrontations and gunfights. It’s a bit like Arnold Schwarzenegger in “Twins”. A role that also clashes a bit with Arnold’s career as action-hero. I got nothing against an actor who wants to try something else in his career that’s not in line with the expectations. However, this doesn’t fit with some. The same applies to Willis.

The film doesn’t surprise since it’s based on the well-known clichés that occur in most revenge movies. You’ll see the self-taught avenger evolve from a kind-hearted soul (Paul Kersey doesn’t shrink from saving some scum’s life who just killed a policeman) to a self-proclaimed judge with a ruthless vindictiveness. The sale of arms is also denounced here, where once again it’s unambiguously shown how easy it is to get a deadly weapon. And of course, the police are too lax or too stupid to take action against the criminals. The coincidences also play a major role in this film. The highlight is a bowling ball on the loose. At that moment I didn’t know whether this had a parodying function or was intended intentionally.

For members of the N.R.A., it’s mandatory to watch this flick.

In these days when a lunatic starts shooting at a square-dancing crowd in Las Vegas or a frustrated teenager starts mowing down a dozen fellow students with daddy’s automatic machine gun, you could argue that a movie like “Death Wish” is kind of unacceptable. And I’m sure some will become sarcastic about it and use this movie title and the term “N.R.A.” in one slogan. To be honest, there will never be a good time to release a movie like “Death Wish”. As long as the government of the U.S. refuses to see that the second amendment belongs to the era of the Wild West, the problem remains. Instead of arming every individual, they should send a stronger signal to criminally minded fellow men. Allow me to cough up a sarcastic remark myself. I’m sure that the N.R.A. watched it approvingly and sponsored this film. That way their conviction that one can only fight the bad guys by providing the good people with weapons, remains intact.

I admit it wasn’t such a bad Bruce-Willis-movie.

Compared to previous films where Bruce Willis showed up in, this film isn’t really that bad. The only thing Willis is certainly not capable of is showing emotionality. How he responds to the news that his wife has died, raises questions. Has his profession as a surgeon made him numb? Or is it just Willis? “Death Wish” is a remake of a film that fitted in that particular era. The use of YouTube videos that go viral and at the same time Kerry who wears a hoodie won’t make this a film that fits with our current conception of society. Let’s hope Eli Roth made this film to provoke and stir up reactions. And hopefully, the statements about the mismanagement of weapon regulations by the busty blonde saleswoman at “Jolly Roger” were also fictional. However, I doubt the latter.