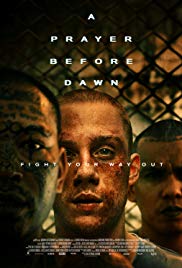 The true story of an English boxer incarcerated in one of Thailand's most notorious prisons as he fights in Muay Thai tournaments to earn his freedom.

What an impressive film. You won’t get a feeling of excitement or relaxation after watching it. It’ll rather leave a bad taste in your mouth. It was as if the smell of blood, rancid food, vomit, and sweat has nestled itself in my nostrils. I had this annoying, uncomfortable feeling afterward. I’m convinced there are other places in this world where you don’t want to end up and which aren’t good for your health, both physically and psychologically. But the Thai prison Klong Prem seems to me the most damned and inhumane place on our planet. A place where you stop being a person and where you try to survive in any way you can. I’m strongly in favor of setting up an exchange program for prisoners worldwide. In such a way that prisoners from wherever, get the chance to taste the prison climate of these regions. I’m sure many will start realizing how privileged their treatment is in this part of the world. Who knows, maybe even a few will come to their senses.

Is there a translator in the house?

“A prayer before dawn” feels like a documentary. It’s as if the camera is filming over the shoulders of Billy Moore (Joe Cole) all the time, a Brit who’s a boxer in Thailand and is being arrested for selling drugs. The nightmare in which he’s imprisoned for three years and the daily struggle in this hell hole is the basis for his book that he publishes later on. It’s titled “A prayer before dawn: A nightmare in Thailand“. Don’t expect long dialogues. Or you are someone who understands Thai quite well. That alone would drive me crazy already. The endless whining and shouting of those tattooed, golden-toothed Thai criminals. You have no idea what they are talking about. You can only guess whether they ask a very ordinary question or threat you.

The number of films that take place in prisons is almost infinite. But there are none so realistic and painful to behold as “A prayer before dawn“. Even “Brawl in Cell Block 99” doesn’t seem to be so brutal and intense, despite the extremely violent images. Why? Because “Brawl in Cell Block 99” is a fictional story. The story about Billy Moore shows an unambiguous, unvarnished picture of his struggle for survival and his perseverance to maintain himself in this barbaric environment. A story about how an individual has to push his limits both physically and psychically. A black and white portrait with a thin dividing line between life and death. One moment you see how Billy almost kills a fellow prisoner at the request of a corrupt guard. The next moment you see a tender moment between him and the transvestite Fame (Pornchanok Mabklang). A moment to catch your breath after all the brutal violence.

Top notch acting. Even from those ex-prisoners.

The acting of Joe Cole is extremely convincing. You can simply feel his fury, despair, and fear. Cole’s acting is purely en simply physical as there is practically no dialogue to be heard. A shrill and threatening “Fuck off” is the main thing that comes over his lips. You are witnessing how the accumulated tension and frustration suddenly flares up during confrontations and his Thai boxing. And at the same time, you see Cole fighting against his addiction. The Thai inmates are all amateurs in the field of acting but apparently, a large number of these side characters actually have spent time behind bars. Maybe that’s why it all feels so real.

No, “A prayer before dawn” is no fun to watch and will certainly still haunt you the next days after. If you expect a detailed story, you will certainly be disappointed afterward. The narrative is reasonably straightforward and concise. It’s nothing more than a report of Billy’s stay in this hellish place on earth and his constant fight to get out of it unscathed. But, as I said, this film will certainly stay with you. It’s, as it were, beaten into you.