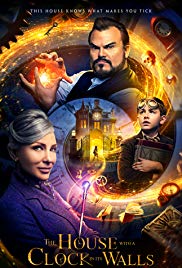 A young orphan named Lewis Barnavelt aids his magical uncle in locating a clock with the power to bring about the end of the world.

You can eat cookies till you throw up, for all I care.
You’ll see… things are…quite different here.

Have you seen “Goosebumps” where Jack Black plays the leading role as well? Well, you can expect almost the same thing. A kids-sized horror film. And I had the same feelings about it after a certain amount of time. Namely that it’s all a little bit over the top. Probably it wasn’t the intention to make it too scary. It should all be about magic and mystery. And it sure was the first half. I admit I have a weak spot for such type of movies. “The House with a clock in its walls” reminded me of the wonderful “Harry Potter” movies. Here too it’s about an orphan boy who ends up in a foster family and apparently has magic powers in his DNA. Lewis (Owen Vaccaro) himself looks like Henry from “The book of Henry“. Also an outsider with aviator glasses on. But halfway the movie derailed a bit and felt rather exaggerated, absurd and grotesque.

As I mentioned earlier, the first part is highly entertaining. Lewis is being introduced. He meets uncle Jonathan Barnavelt (Jack Black) and his neighbor Florence Zimmerman (Cate Blanchett). And of course, there’s this huge Victorian-looking house with its ghostly contours. As a spectator, you notice there’s something very unusual going on and certain ordinary things come to life (and in normal circumstances they never do). Something that Lewis only discovers afterward. We then see Lewis attending his new school and how he befriends Tarby (Sunny Suljic), the popular boy who briefly raises Lewis’s popularity. All this is brought with the necessary humor and is highly entertaining for young and old. Even the presence of Jack Black was bearable. I’m not really a big fan of Black’s humor. Usually, it’s bland and ridiculously exaggerated. That is why a similar scene with a lion-shaped-bush with stomach problems is being used three times. Bland, trite and exaggerated toilet humor.

Puking pumpkins? Let’s use the umbrella.

But in general, it was still enjoyable. What amused me the most was the constant bickering between Uncle Barnavelt and Mrs. Zimmerman. That never really got boring. And then suddenly those puking pumpkins (and boy this was bad looking CGI) and a bunch of puppets shows up. Also, you’ll witness the resurrection of the evil Warlock Isaac (Kyle MacLachlan) and his illustrious wife Selena (Renée Elise Goldsberry). And finally, everything revolves around a very well hidden clock somewhere in the house of uncle Barnavelt. Although he’s a talented wizard and Mrs. Zimmerman a famous sorceress, finding this clock seems an impossible task. Even uncle Barnavelt is forced to use other tools to look for it. Like a huge pickaxe, for example, with which he starts to demolish walls in the middle of the night. And the way they handled this clock-problem, in the end, was also an easy solution. Apparently, the scriptwriters were exhausted and a little uninspired.

Most positive was Cate Blanchett.

No, I wasn’t really impressed. Visually it looked sophisticated and extremely well-taken care of, but it never was as magical as “Harry Potter“. Cate Blanchett was perhaps the only highlight in this fantasy film for kids. It was as if she tried to be the new Mary Poppins with her behavior. Maybe this movie is perfect to stimulate the fantasy of 8-year-olds. Though they must endure the hyperactive behavior of Jack Black. Is it because of the awkward way in which horror director Eli Roth tackled this project? Or is it due to Jack Black’s lackluster humor? Or was it the laser beam-shooting umbrella of Cate Blanchett used?

No more fantasy-movies for kids.

Anyway, my interest disappeared and made way for annoyance and lots of headshaking. The only thing I was hoping for was that the damn clock that posed a threat to our universe was found as quickly as possible. And that the other books written by John Bellairs aren’t used for a motion picture as well. After “A wrinkle in time” and this movie, I’m going to avoid fantasy films for children. Enough is enough.