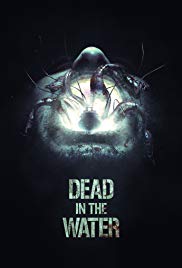 The members of a ship's all female crew are forced to fight for their lives against an unknown enemy while stranded in the middle of a massive storm 600 miles from shore.

Kill me.
Kill yourselves.
End this.

Although the opening scene with the “Amphitrite” (a kind of fishing boat) traveling across the ocean looked really cheap in terms of “special effects”, the rest of the film wasn’t so bad. The ocean scene really looked as if it was a toy boat filmed in a bathtub. But besides this, don’t expect extraordinary things. The acting was sometimes disappointing and felt amateurish. And the story itself is sort of “Alien” on the ocean instead of somewhere on a planet in a galaxy far, far away. Especially the fact that it’s a “SyFy Original” made me shudder a bit. I like low-budget and indie films, but “SyFy” films don’t excel when it comes to originality. And even though it had a real low budget feeling at certain moments, there were also a number of positive things to be found.

Women on the helm.

The most striking thing about the film is that the crew only consists of women. Maybe this fits in with the “MeToo” atmosphere of today, but a little male support on this ship would have been welcome. Even if it was just to tighten a bolt here and there, or force a steel door. But I have to admit that this club of Greenpeace militants could stand their ground. Their determination is admirable. That was noticeable during the pursuit of a fishing boat, fishing illegally in these parts of the world. The brash way Gwen (Bianca Simone Mannie) whips the old sloop across the ocean, isn’t only bad for Michelle’s stomach (Amy Louise Wilson), but it’s also not so good for the coughing engine. The result is a failing engine while a storm front is coming their way. And a ship without a motor in the center of a storm is doomed to disappear to the seabed. And as icing on the cake, Michelle thinks she has seen a drowning man. And that man appears to be a kind of Trojan horse. Because, before they fully realize it, there’s a parasitic creature that slithers over the ship through all possible escape routes.

The special effects are alternatingly excellent and bad.

As I said before, the movie isn’t really original and borrows a lot from other well-known films such as “The Thing” or “Life“. But it’s mainly the film “Alien” you think about while watching certain scenes. If you know the “facehugger” phenomenon, you understand what I mean. The main problem of this film is the quality fluctuations. There are excellent special effects and next, you’ll see effects that are completely worthless. And it alternates regularly. For example, I found the autopsy scene extremely successful. And the next moment the organism looks like withered seaweed that glides around and sticks to windows. But fortunately, it wasn’t of the same level as those ocean waves.

Praises for the movie poster.

The same for the acting. The seven female crew members really convinced me at certain moments. At other times it came across as implausible. Maybe it was due to the limited freedom of movement. At a certain moment, it seemed as if they were constantly running from the control cabin to the engine room. On the other hand, this limitation makes it fairly claustrophobic. It’s certainly exciting enough at certain times. Such a creepy atmosphere where people know that danger can strike from every corner. So if you like movies with murderous organisms, then you will like this SyFy movie. However, don’t be fooled by the film poster. It is not a huge blubbery creature like I thought from the beginning. The illustration is cleverly put together.