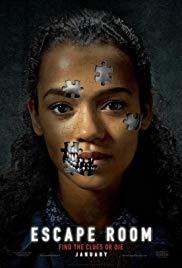 Six strangers find themselves in a maze of deadly mystery rooms, and must use their wits to survive.

Be the first to escape our most immersive rooms yet

Does coincidence exist? I’m starting to believe it. Coincidentally, I had just seen this movie and a few days later my wife receives a birthday present from her brother. An entrance ticket for an Escape Room. My first reaction was “Do I really have to go too?” That was meant as a joke because I don’t think we’ll experience such situations as in the movie “Escape room“. I’ve done two of those escape rooms already (one we’ve finished successfully) and so I know it’s nothing more than doing some old-fashioned puzzling to get out. No “Saw” -like conditions like in this film “Escape Room“. But mind you. There aren’t any extremities here as in “Saw“.

Escape rooms are a hype.

They sprout like mushrooms and are good for short-term entertainment. Nothing like being locked up in a room and then trying to get out of it on time, with a group of friends or family. The characters in this film may not be family related, but they all have one secret thing in common. And they all unexpectedly receive a mysterious cube in which an invitation for the ultimate escape room is hidden. And voila, our six participants Zoey (Taylor Russell), Ben (Logan Miller), Jason (Jay Ellis), Mike (Tyler Labine), Amanda (Deborah Ann Woll) and Danny (Nik Dodani) are waiting in a waiting room of a company. They’ll be competing with each other so one of them can win the price of $ 10,000.

And the winner is the one who can escape as first from the inventively designed rooms. In my eyes, they were all a bunch of losers when they accepted the invitation. How can you be the first to escape from an escape room. Everyone knows that it’s played and won as a team. Wasn’t there any of these competitors who asked himself or herself that same question? I could understand it from scatterbrain Ben. But I was expecting more from brainiac Zoey, stock exchange guru Jason and “Escape Room” expert Danny.

A soft-version of “Saw”.

Now, it’s not as bloody and frightening as “Saw“. The makers of this film behaved well and made a softer version. If only they had made an effort to increase the tension a little more and the victims’ fatal ending a bit more bloody, this certainly could have been a superb movie. The only thing that causes some excitement, is the design of the different rooms that the group of competitors must get through. And preferably unscathed. I found the room in a snow landscape and the pool bar magically designed. Not only the decor was brought to perfection with lots of details. They also wracked their brains about the puzzles that need to be solved. But as I said before, this is also the only thing I was enthusiastic about.

It was as exciting as an “Escape room” visit.

Unfortunately, they’ve chosen to use the final scene as an intro. That way a large part of the tension is taken away already. Even though a small surprise provides an alternative outcome (but to be honest it’s also fairly predictable), the end isn’t really convincing and satisfying. Admittedly, the final reason why these specific people have been chosen gives the whole a sinister taste. But unfortunately, it fell short in several areas. In fact, the denouement looked really implausible. Who manipulated the electronic scoreboard in the end? And for the umpteenth time, the film ended in such a way that there’s another opportunity for a sequel. I’m not looking forward to it. It was entertaining. Sure was. But you also have that when you actually visit an “Escape Room”. I expected something more from this.