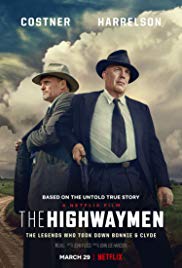 A pair of Texas Rangers come out of retirement to catch the infamous outlaws Bonnie and Clyde.

Bonnie and Clyde have been on the road for two years.

Cold-blooded killers who are more adored than movie stars.

This has to stop.

Who doesn’t know Bonnie and Clyde? In 1930, this pre-war couple had nothing better to do than go down the path of crime and leave a trail of death and destruction in the US. This young couple was hunted by the police for two years. Until they were killed in an ambush where their escape car was riddled with thousands of bullets (so they claimed). Their victims were mainly banks and gas stations. And among the murdered victims were also a few police officers. This all took place during the turbulent 1930s when the economic crisis hit hard and many led a poor life. Perhaps that’s why both criminals were seen as heroes. Their outlaw life looked like an adventure after being romanticized. It appealed to everyone’s imagination. And because they wanted to hit the established order financially, they were worshiped like true pop idols. Their story took on mythical proportions. But who knows the authorities who put an end to this duo and their criminal life? And that’s what this film focuses on. The arm of the law from that time who, as old-fashioned bounty hunters, going after this gang.

If this were the umpteenth Bonnie & Clyde film (a whole series has already been made with the most famous one with Warren Beatty and Faye Dunaway) I would have skipped it. But the fact that the story is looked at from a different angle and also that Kevin Costner and (especially) Woody Harrelson play the two Texas Rangers here, made it obvious I had to watch this film. Man, it’s always a pleasure to see an actor like Harrelson at work. Even though it’s a deadly serious role this time, he always manages to make me smile. However, things don’t get crackling in this film. But that is not due to the interpreters of the two main roles. The lack of action in this film (with the exception of a well-portrayed dusty pursuit and the ultimate ambush of course) will be a letdown for many.

Want to see Bonnie and Clyde? Bummer, they’re not often in the picture here.

The fact that Bonnie and Clyde barely enter the picture and the motive to become such a murderous couple isn’t explored in depth, may also be a disappointment for many. I think this was a conscious choice by director John Lee Hancock. He wanted to concentrate fully on the two Rangers who are chasing B&C. This way it felt as if nothing really happens during large parts of the film. For the most part, you’ll just witness dialogues between the two retired Rangers. They look like two washed up troublemakers who went too far as Texas Rangers in the past. From the outset, you have the impression that these were out of control cowboys who hold the motto “First shoot and then ask” as of paramount importance. Not that you get to see anything. You can only conclude this from what is being said by the hastily convened committee of dignitaries who are reasonably fed up with the violent life of B&C. And the anecdotes those two veterans tell sporadically.

So it isn’t really action-packed and highly entertaining. In addition, you already know in advance how it will end. So you won’t be nibbling your fingernails to the skin because of the tension. However, if you are an avid fan of the 30s and the whole atmosphere that exuded that era, then you will enjoy watching this. The film perfectly portrays this era. The vintage cars from that time and clothing. But especially the spirit of these days is constantly palpable. In those years, the industrial revolution and technical progress was ready to explode. It was a time where social life was average and easy. But also the less pleasant side from that period (due to the recession) is shown in a brilliant way. The poor, impoverished neighborhoods and camps scattered here and there were characteristic of that time.

Excellent acting in this boring affair.

What remains is the acting of our two Texas Rangers. It goes without saying that the acting is of a high standard. What else did you expect from such star actors? If there’s one thing I enjoyed the most while watching this movie, it’s the interaction between them. The one is more grumpy and bitter than the other. And Woody struggles again with persistent alcohol addiction (just like in “The glass castle“). These two seasoned Rangers provide the necessary vibrancy and entertainment. But unfortunately, this is not enough to take the boring and slow “The Highwaymen” to a higher level. Daily life was perhaps nerve-racking and exciting to Bonnie & Clyde. And I can imagine they led a restless life while fleeing from one place to another. As energetic as their life was, so boring it was for their pursuers. And that trend continued in this film. Are you naturally impatient or you are in the midst of a period that requires a lot of energy so that you are constantly fighting fatigue? Well, then this film is definitely not recommended.