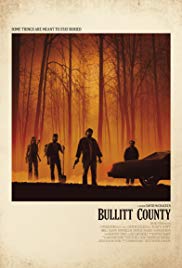 An action/thriller set in 1977 about four friends who reunite for a bachelor party to hunt for buried Prohibition money on Kentucky's Bluegrass Bourbon Trail, only to become ripped apart by greed, corruption, and murder.

Anything buried out there,

is meant to stay buried.

“Bullitt County” isn’t really an easy film. To be honest, I had to control myself not to give up after half an hour. It wasn’t very exciting, so to say. On the contrary. It was painfully slow and meaningless. The story is situated in the 70s as you can see from the colorful printed shirts and the Woodstock-like attributes. A reunion of grown-up school friends who wanted to break the monotonous existence as a responsible citizen. A trip to Kentucky is planned where they’re going to recreate a pub crawl past their favorite distilleries. The only person who isn’t voluntary participating is Gordie (Mike C. Nelson) who’s about to get married. He’s being kidnapped, thrown in the suitcase and taken to the destination. Apparently, this is his bachelor party.

It is only when Gordie hears there’s a hidden treasure, the “Bullitt Treasure”, in these regions, the pace is going up. Apparently, it’s a considerable sum of money (profits from illegal moonshining) that the Bullitt family has hidden in the local forests during the Prohibition. At the same time, it turns out that their favorite bar has been taken over and the new owners turned it into a wine bar. So the plan of a boozing trip is pushed aside. Also, Gordie appears to be a recovered alcoholic who has not drunk a drop for 10 years. So nothing prevents them from entering the woods, armed with spades and camping equipment. So they’re off on a treasure hunt. Apparently a very cozy venture, which in turn leads to impressions of four aged hippies who, while playing guitar, smoke a few hash cigarettes and consume quite a bit of liquor. Not really fascinating, but there’s already this slight feeling that something sinister is coming to the surface. A secret that this close circle of friends has been dragging along for years. And apparently, no one feels the need to bring it up again.

And suddenly it’s a different movie.

The moment they are invited by a friendly couple to eat something in their cabin, my expectations regarding the film was already low. “Bullitt County” won’t be more than a psychological drama in which a cozy getaway leads to emotional outbursts which bring out deeply hidden traumas from the past. And then all of a sudden hell breaks loose. And before I realize it, I am watching a completely different movie. A movie about survival, cheating, blame, and guilt. Slowly it becomes clear that Gordie’s emotional backpack gradually got heavier. Not only has he successfully got rid of an alcohol problem. He’s also a Vietnam veteran and didn’t go through this war completely unscathed. This results in a person plagued by PTSD who can’t control himself during confrontations. And then there’s an event in the past that weighs the most. It’s being revealed through some flashbacks as the film progresses.

Robin (Jenni Melear), Keaton (David McCracken) and Wayne (Napoleon Ryan) were also involved in this incident but apparently processed it. Gordie also blames them for that at a certain moment. The indifference makes him mad. I also noticed that caring about others isn’t their strongest side. Who goes on a pub crawl with an ex-alcoholic? What follows is a burst of pent-up frustration that degenerates into a nerve-racking and bloody denouement. Mike C. Nelson plays a terrific role. The way in which Gordie’s personality (also thanks to a momentary relapse) changes from a good-natured person with issues into a revenge-taker driven by madness and rage, is simply wonderful to see. A solid piece of acting. The share of Dorothy Lyman and Richard Riehle was short but powerful.

No, “Bullitt County” isn’t a memorable movie. Maybe it would have been better to shorten the intro where we meet those four characters. And the number of sudden twists in the story was a bit overwhelming. And have we not seen that one twist in another movie before? Anyway. The film managed to pleasantly surprise me when the second half of the film announced itself. A film about how a pleasant situation can turn quickly and end in a tragedy. “Bullitt County” shows how someone goes through life, marked by guilt feelings and what impact this has on his personality. Despite Gordie’s mistakes and aggressive behavior, you still feel compassion for him. In short, a successful low-budget indie. Just the way I like them.