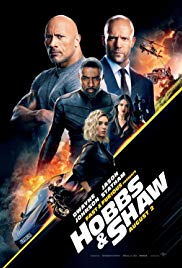 I’m not working with this guy.

I’ve been there, done that.

The minute he gets involved, you can kiss goodbye to any finesse

because She-Hulk here only knows how to smash.

Yeah, Mr. Arson here only knows how to blow shit up.

When I was at the cinema with my family and close friends (with little kids in our company) and had to choose between “The Lion King” and “Hobbs & Shaw“, I was facing a dilemma. On the one hand, you have the live-action remake of a Disney classic with a story I know thoroughly (Not difficult when you have children and you’ve already seen the original cartoon a trillion times) but one I still love to see. On the other hand, you have an action movie with Dwayne Johnson and Jason Statham. And apparently, it has something to do with the “Fast & Furious” universe. The presence of Jason Statham was very hope-giving. I like Statham. His reserved attitude. That subdued calmness. That characteristic, juicy accent. And the explosive power that bursts out time and again. Well, apparently I’m a fan (even though I thought the movie “Crank: High Voltage” was absolutely worthless). Dwayne Johnson has surprised me several times in recent years. Especially with “Jumanji: Welcome to the jungle” and “Rampage“. Unfortunately, there are also a large number of crap movies in his filmography. But what worried me the most, was the “Fast & Furious” reference in the movie title. Not something that makes me feel excited. In short, it was a terrible dilemma.

Eventually, I opted for the Johnson and Statham movie, even though I knew I could give my brain to someone for safekeeping when entering the screening room. In other words, you let your mind go blank and certainly try not to get irritated because of improbabilities and absurd ridiculousness. And yes, the story itself is paper-thin and non-meaningful. You have the deadly, programmable super-virus “Snowflake”, the MI6 agent Hattie (Vanessa Kirby) who steals the virus from a terrorist organization and the bad guy Brixton (Idris “The Dark Tower” Elba) whose genetically manipulated body is crammed with high-tech trinkets. Compared to him, Robocop looks like a Playmobil toy. And wait until Brixton places his butt on an impressive motorcycle. A vehicle that functions autonomously, is immensely flexible and with which Brixton does inhumane acrobatic tricks. Batman, eat your heart out. These are the first introduced protagonists.

It’s not really related to F&F.

When will Hobbs and Shaw turn up? Well, when it goes terribly wrong. Let me reveal the main storyline. Hattie injects herself with the virus so Brixton can’t get his bionic hands on it. Brother Shaw (Jason Statham) is summoned to protect her. And he has to do that together with his arch-enemy Hobbs (Dwayne Johnson). That’s it. Not a really impressive story, but enough to come up with an action-rich feature film. And this film certainly is action-packed. Fans of straightforward fistfights and flashy chases will definitely enjoy themselves. For them, this flick is worth a watch. I had to conclude that it didn’t remind me of the F&F franchise. Apparently, Hobbs and Shaw once appeared in this successful series. And yes, there’s the McLaren with which Shaw is racing through the streets of London. You have that impressive motorcycle Brixton uses to make the pedestrian crossings unsafe. And there’s even a moment when nitro is injected into the motor of an old-looking truck. But that’s the only thing that can be related to F&F.

Hobbs and Shaw bickering all the time.

The strongest point in this film is the interaction between the two main characters Hobbs and Shaw of course. Mainly because their personalities are the exact opposite. There’s the constant bickering and the sharp oneliners go back and forth. Not that I was laughing out loud all the time, but now and then some really comical situations caused a chuckle. For example, the scene where digital face recognition is an important issue. Hilarious. And Hobb’s derogatory comments about Shaws’ height are absolutely funny. Perhaps at some point, I had this “OK, it’s-enough-already” feeling. And the changeover from being arch-enemies to fighting buddies who respect each other was a bit too obvious. The action part also reached a saturation point after a certain time. It’s always fun to see how Statham, with the help of a number of random objects lying around, eliminates a lot of opponents while Johnson uses his impressive muscle mass to beat them to a pulp. But at a certain moment, the over-the-top feeling is a bit too much.

Although exaggerated, it was fun watching.

I really had fun while watching this movie. That is, three-quarters of the film. Even though it’s sometimes extremely exaggerated and unbelievable. Unfortunately, the absurdity grew to such an extent that I couldn’t suppress a “Yeah, right!”, while shaking my head. The movie dropped to a dubious and worrying level the moment the three heroes arrived on the island of Samoa, home of Hobbs. The improbabilities followed each other at a quick pace, with a showdown between Hobbs and a helicopter as the highlight. And the famous motto of the three musketeers, “One for all, all for one”, is being clarified in a grotesque final. Just one small thing to mention. There also two guest roles for both Helen Mirren and Ryan Reynolds. One role equally meaningless as the other. Even though I had my doubts and prejudices, “Hobbs and Shaw” succeeded in presenting an entertaining and fun movie after all. And when I left the cinema, I neatly asked for my brain. I still need it for other movies in the future.