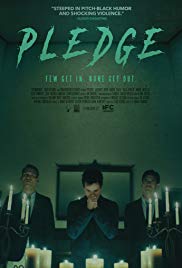 A group of college freshmen pledge an exclusive fraternity but soon realize there's more at stake than they could have ever imagined.

Do I tuck my shirt in?

I don’t care, you look like you’re gonna fix the computer anyway.

This straightforward movie “Pledge” managed to surprise me. At first, I didn’t expect much from it. But as the story unfolded, I thought that the makers of this horror story had incorporated some strong elements into it. Those who have experienced the rush into a fraternity personally will be happy that they didn’t have to endure a similar experience. It’s extremely difficult to stand out with horror when you see the number of horrors being released these days. After the first 20 minutes, it looks like you are going to watch a remake of “Porky’s“. Or better still, “Revenge of the Nerds“. You could say it was funny one way or another. But the fun part soon made way for the disturbing section. An atmosphere of panic, fear, and despair prevails until the end of the film.

They didn’t have to ask twice.

Three close friends, who probably always sit on the sidelines when it comes to social events, do their utmost to be admitted by a fraternity. Hence the title of this film. The film starts with David (Zack Weiner, writer of this film), Ethan (Philip Andre Botello) and Justin (Zachery Byrd) who visit one clubhouse after the other. The three nerds, however, are rejected, ridiculed or simply denied access everywhere. Until they suddenly receive an invitation from a hot looking girl to attend a private party somewhere on a remote domain. An orgasmic experience with ditches of alcohol in the company of a horde of ravishing looking young ladies. Young ladies who they refer to as being “out of their league” most probably. Not surprisingly, all three (and a few other “freshmen”) over-enthusiastically agree with Max’s (Aaron Dalla Villa) invitation to join this exclusive student association. An elitist club with only a limited number of members.

It certainly isn’t a typical ritual.

Unfortunately, the hazing procedure is rather rough on our 3 friends. It’s well known there are often oddities and extreme things involved during hazings here in Belgium. Binge drinking, beating with a cricket bat, sexually charged assignments and eating disgusting things. Other academies are taking it a bit easier. There, students have to work out a translation or explanation about a certain topic as an assignment. Boring! The club our three nerds want to join has another agenda. The assignments are painful, disgusting and especially deadly in nature. It’s not really terrible “torture porn”. So don’t expect situations as in “Hostel” or “Saw“. Could be I’m insensitive to that. When you’re able to watch a movie such as “Martyrs” without feeling disturbed, the humiliations the newbies have to undergo are of Sesame Street level.

There’s a lot of decent acting in “Pledge“. The three silly friends portray those typical characters who are mostly the center of mockery and bullying in American schools. A chubby dude who’s always asking for something to eat and cannot really be praised for his speed. The nerdy guy who most likely spends his days sitting behind a screen and always says the wrong things. And finally, a kind of a sissy who reacts girlishly to threatening situations and most certainly will jump on a chair when a mouse appears in front of him. Three types that are convincingly interpreted by Zachery Byrd, Zack Weiner, and Philip Andre Botello. But especially Aaron Dalla Villa made an impression. That demonic look and sadistic tone fit perfectly with the cruel Max.

Thanks to the short playing time, “Pledge” is suitable as an in-betweener during a weekday evening. Thanks to the pace of the film, it never gets boring. And although I found the horror level quite average, they managed to deliver an intense and exciting film. And despite the fact that it was a low-budget film (“Pledge” was funded through Kickstarter), I thought the cinematography was of high quality. The lurid and threatening atmosphere was not only delivered by the story but certainly also by the supplied footage. To be honest, “Pledge” is one of the better Low-Budget indie horror movies I’ve seen in the last year. Certainly a must-see for lovers of the genre.