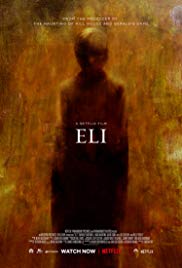 A boy receiving treatment for his auto-immune disorder discovers that the house he's living in isn't as safe as he thought.

Do you know what happened to the boy who asked too many questions?

“Eli” is a horror you can watch on Netflix and it’s not bad at all. But it takes a long time before the conclusion in the story surprises you completely. The introductory part reminded me a bit of “Midnight Special“. A very young boy whose daily life is limited to a plastic-insulated room and who can’t leave the house without wearing a weird looking sort of spacesuit. Apparently Eli (Charlie Shotwell) developed an autoimmune disease at a later age and exposure to outside air and sunlight is life-threatening to him. Together with his parents, Rose (Kelly “10X10” Reilly) and Paul (Max “Spectral” Martini), he’s on his way to the only rescue that remains for him. A completely sterilized old mansion (a house that looks like a typical haunted house) where Dr. Horn (Lili Taylor) applies a specific gene therapy to treat medical cases such as Eli.

I keep repeating it: “Wait for the end”.

After this medically oriented introduction, the focus shifts to the paranormal. Before you realize it, clichéd ghost phenomena are brought out. So the whole shebang you encounter in standard ghost stories, also appear here. From seeing ghosts in a mirror. To writings appearing in Eli’s breath on a window. Although these are standard horror-film tricks, they are effectively used to startle you. But despite that, it’s a long wait for the most important turn in the story at the end of the film. And this story-turn makes it a completely different story. At that moment you realize that all your guessing was completely wrong. So it’s recommended to watch the film as a whole, so you get an answer to all the questions you asked yourself.

Perhaps the strongest aspect of “Eli“, is its mysterious character. What kind of treatment is it that Dr. Horn is practicing? Because you’ll see that it’s not such a conventional treatment. It’s a rather painful procedure whereby a virus is injected into the spinal cord to repair the failing genes. And who are the ghosts tormenting him? Are they good-natured? Or malicious? That’s something Eli is trying to discover for himself while locked up in this sterile cage. His parents and the medical staff blame the medication for these sightings and dismiss it as hallucinations. The only one who believes Eli is Haley (Sadie Sink), a local girl with whom Eli sometimes talks through a huge window. Where Haley comes from and what she does there is again a mystery. As time passes, the whole thing sounds a bit fishy to Eli.

As I said before: “Wait for the ultimate revelation“. Until then you have to endure a typical ghost story without too many highlights. Some praiseworthy words about Charlie Shotwell’s acting. For such a young guy it’s not so obvious to use a whole range of emotions. But to be honest, he convincingly did it. The other characters’ contribution is fairly limited. Max Martini plays the determined father. Lili Taylor the mysterious doctor. And Kelly Reilly is no more than the worried mother who wants to hug her son again. It’s not Reilly’s most breathtaking acting performance. That’s reserved for her role in “Eden Lake“. All in all, “Eli” is not immediately an exciting film. But it’s not extremely bad either. The only thing is, that it requires some patience. So waiting for the end is the message. And that’s the last time I’m going to say that!

This quote I found grossly exaggerated: “New Netflix horror movie Eli is terrifying viewers to such an extent that some have claimed to be “seeing demons” after watching.”

You can watch “Eli” on Netflix now!