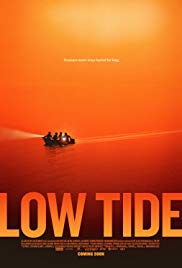 Alan, Red, and Smitty spend high summer on the Jersey Shore roving the boardwalk and getting into trouble. But the discovery of good old fashioned treasure sets the friends on an escalating course of suspicion and violence.

Eight, nine, ten. A thousand.
You boys find any more coins,
give me a holler.

Once and a while I like to watch a well-made coming-of-age movie. Such a film about juvenile innocence in which a radical event shakes the pleasant life of one or more young people. A life experience many of them look back at when they are adults. Like in “Stand by me” where a group of comrades goes looking for a corpse to become famous. In “Mud” it’s about two rascals helping a fugitive. And “Rockaway” shows two brothers who come up with a daring plan to get rid of their violent father. In most cases, things get a bit out of hand, making the impact on the involved kids even greater. Or it should be such a fairy-tale story as “The Goonies” (also aimed at a youthful audience) with a whopper of a happy ending so that you can walk around for days with such a broad smile that people are convinced that a coat hanger got stuck in your mouth.

Admittedly, “Low Tide” is a bit reminiscent of “The Goonies“. Here you have two brothers, Peter (Jaeden “The Book of Henry” Martell) and Alan (Keean “Alita: Battle Angel” Johnson), who find a bag of gold coins while plundering beach houses of tourists. Golden coins of such value that it could be a way out of their futureless life situation. The whole story is situated in a remote region of Jersey Shore. A shabby neighborhood where fishery plays an important role. And tourism is also flourishing thanks to the wealthy day-trippers from the surrounding areas. The teenagers call those day-trippers Benny’s (residents of Bayonne, Elizabeth, Newark, New York). Alan, Red (Alex “A-X-L” Neustaedter) and Smitty (Daniel Zolghadri) hate them and therefore adhere to one rule during their raids. Homes of the local population are categorically shunned when they go looting once again.

A charming film full of frivolity.

There’s something charming about this film. It radiates frivolity and carefreeness when you see the three bosom friends joking at the fair. Acting tough and flirting with girls passing by. A summery atmosphere full of joy and mischiefs. Of course, their nocturnal escapades cannot be approved. For them, it seems like a game and a way to get money to sponsor their daily activities. Parental control is nil since Alan’s father has been at sea for some time. The rest seems to be parentless (no idea what Red’s family situation is) or their parents have no time or desire to worry about them. Even when Smitty loses a shoe and breaks a leg during such a nocturnal adventure, the three don’t seem to worry. It’s only when Peter is involved and a valuable treasure is found that the tensions starts to rise. Suddenly there’s discord within the close friends’ club. Distrust and greed arise. And when the local police officer Kent (Shea Whigham), who keeps an eye on one of the rascals, begins to meddle in their affairs, the real personality of some is struggling for dominance.

Not too bad but disappointing.

Despite the generally fascinating acting and the beautiful images presented in this film, there are a few shortcomings in this movie. First of all, the story itself is interesting, but on the other hand, it’s a bit too simplistic. You can easily summarize it all in a few short sentences. But most of all, there’s mainly a lack of tension. It’s quite obvious that it won’t end well. And that such a handsome guy like Alan will get some major attention from girls he meets, even though she’s a Benny, with a romantic tête-à-tête as a result, is not really a surprise and something you could expect. Red’s aggressiveness reaches a peak as his suspicion grows more and more. And they begin to feel the hot breath of Sergeant Kent down their neck. And yet the film fails to end up in an apotheosis. The outcome was actually disappointing, even though it was a logical conclusion. No spectacular firework (as can be seen at the end of the movie) and far too predictable. Unfortunately, because it still was a charming film.