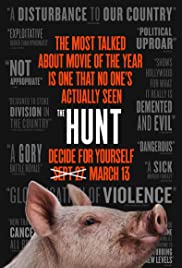 Why would they do something like that?
Same reason elites do anything…
’cause they think they’re better than us.

Can someone please explain why there was so much fuss about the movie “The Hunt“. I understand that the release date has been postponed due to the El Paso, Dayton and Gilroy shootings last year. Let’s just hope that not every violent film suffers the same fate, as the number of mass murders in the U.S., according to the database of the news agency AP, USA Today and Northeastern University, is shockingly high. In 2019, they counted 41 such massacres. Those are a huge number of incidents that can cause releases to be postponed. I suggest they restrict the release of violent video games, new material from well-known music bands that use a rougher music style and bloody comic strips. Because let’s admit it. Every time such an incident happens in the U.S., doomsayers pop up like mushrooms to proclaim that heavy metal (in the past Marilyn Manson was a sitting target) and violent games (such as Counterstrike for example) are the cause of senseless violence with dozens of victims. No sensible person there relates free (and uncontrolled) sale of weapons with all that violence. Even now in this Corona crisis, US citizens are flocking to the arms stores to purchase firearms and ammunition en masse, because they fear that people may react rather strangely to this crisis. Well, here in Europe one can only make victims by throwing tons of toilet paper at someone, since that’s the most hoarded item here.

More movies similar to this one.

In itself, “The Hunt” is just an average violent film with explicit, gory footage. But claiming this film is the superlative of other films in terms of violence, is certainly a bit simplistic and short-sighted. Let’s look at films such as “You’re next” or “The Purge“. These films have an almost similar concept. The concept of hunters and the hunted. Even “The Hunger Games” tends to go in that direction. But apparently, that was commercially permissible. The recent film “Ready or not” is better comparison material. Also, a film in which someone is being hunted like a wild animal and a series of gory, bloody scenes are shown. Though, the denouement in this movie effortlessly exceeds what is to be seen in “The Hunt”. On the other hand, the satirical character is more prominently present in “The Hunt“. And you still want to watch a movie where blood flows freely? Well, you should try “Revenge” (also a movie that ends with a fight to the death). In short, if you categorize all films that could possibly incite senseless violence, you’d end up with a richly filled list.

The gap between rich and poor.

What’s explicitly emphasized in “The Hunt”, is the immense gap that exists between the wealthy and the average people living in the US. Of course, they turn it into a political statement once again (conservatives against liberals). A group of so-called conservatives is being kidnapped by a group of foully and berserkly rich liberals who have too much time on their hands or probably couldn’t think of anything else to spend their hard-earned money on. I’m sure there are also rich conservatives and poor liberals living in the US. But that’s a completely different discussion. The fact that there’s a gap (as big as the Grand Canyon) between rich and poor becomes clear during these Corona times. The poorer inhabitants who cannot afford health insurance massively die a slow and horrible death at this very moment. I suppose many will now consider the fuss about “The Hunt” as being a trivial matter.

You can easily compare “The Hunt” with a porn movie. Storywise it’s really nothing and there’s not much beating around the bush so the action-rich part kicks in quite quickly. It takes less than 10 minutes, I think, for the first victim to die with a well-aimed shot through the head. And from then on it’s a series of massacres and exploding bodies. Not that the victims are unarmed because the hunters have left behind a huge chest packed with dangerous-looking weaponry. Unfortunately, the hunted ones are not exactly experts in warfare or close-combat techniques. However, the group of sadistic hunters haven’t done their homework and checked the background of Crystal (Betty Gilpin). This female McClane has quite a bit of knowledge about combat techniques and weaponry. And that’s something the group of rich people hasn’t taken into account. Crystal plays the game harder and more fiercely than those vicious elitists and manages to turn the situation to her advantage.

Not as controversial as I thought it would be.

Betty Gilpin is perfectly cast for this role. She’s fanatic and grim. A merciless tough lady whose sarcastic and blunt comments made me smile several times. To be honest, I sometimes wondered if she was mentally alright. And yes, she reminded me a bit of Phoebe Buffay. Not only because of the looks. But also by her behavior. A bit of an absent and childlike acting person. Unfortunately, the final confrontation was a bit exaggerated and unrealistic, which accented the slapstick character of the film even more. All in all, “The Hunt” isn’t as impressive as I suspected it to be. It’s watchable but not more than that. The commotion around this film only had the opposite effect (as usual). A new, short-term hype with an over-the-top reputation. But, as violent and gory as this movie may seem, it’s certainly not as controversial as certain tweets from an alleged important person implied.