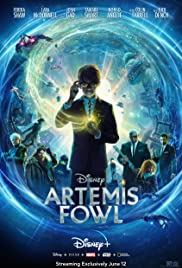 Artemis Fowl, a young criminal prodigy, hunts down a secret society of fairies to find his missing father.

Who do you think you are?
I’m the next criminal mastermind.

I’m afraid you need to be as intelligent as “Artemis Fowl” to understand and keep up with this movie. What a confusing chaos this was. I get it that they are looking for a sort of Harry Potter successor and already started drooling while thinking of the box-office with every new sequel. But they should have spread this single movie over a number of sequels because now you cannot make heads or tails of it. Let me remind you that I don’t know the book series written by Eoin Colfer, on which this film is based. Let alone read one of them. A kind of introduction of the characters would have been helpful for the uninitiated viewers. And that’s a big difference when you compare (and there will be a lot of comparisons) this Disney film with the Harry Potter films. Even if you hadn’t read one of the Harry Potter books, you were sucked into the wonderful story about this mini wizard from the start. All the leading protagonists were carefully introduced and gradually you got to know them, appreciate them, and quickly one of the leading characters became your favorite. With “Artemis Fowl” you better keep focused because before you know it you have missed a whole storyline and a number of important characters. The amount of facts and things of importance is so immense that it’ll make you dizzy.

The making of “Artemis Fowl” on its own deserves a motion picture.

It also took an awful lot of effort before the film could be released. The film rights were bought in 2001 by Miramax Films (in the middle of the fantasy film period when Potter and Frodo ruled). Next Disney announced in 2013 that they were going to make the film in partnership with The Weinstein Company. The creation of this feature film was very different from what had been expected. First of all, you had the disappearing trick of some directors. Then there was the Weinstein affair with Harvey waving his wand too much apparently. Next came the disgruntled fans and last but not least the Coronavirus. In the end, it was decided to stream the film on the Disney + platform instead of screening in the cinema. For sure this was the best decision they could have ever made. No one would be inclined to watch it in the cinema after reading a few reviews. Unfortunately, the revenue from Disney + platform subscriptions is not enough to bear the price tag of a sloppy $ 125 million.

What else went wrong besides the fact it’s a very confusing story? Well, to be honest, I wasn’t really charmed by the characters themselves. Artemis Fowl Jr. (Ferdia Shaw) is an annoying kid without any charisma and totally insensitive (A kind of MIB version of Richie Rich). A deadly serious little brat with an attitude. Admittedly, his intelligence is lightyears beyond normal and he obtained a series of diplomas at a very young age. Plus he comes from a wealthy family and probably took everything for granted during his young life. The magic of a film doesn’t only depend on the magic of the story itself, but also how amiable the main characters come across. No one could resist the charms of Harry Potter (I know. There’s the comparison again.): that poor little fellow living under the stairs, with his roguish smile and lightning bolt on his forehead. I really didn’t find Artemis that charming. And even the more famous actors made little impression. Colin Farrell had a depressed and sulky expression throughout the film as if he already saw the potential for disaster. Judi Dench was actually the only one to stand out in her green leather fairy outfit. But that was more because of the charismatic nature of her character Commandant Root. And Lara McDonell looked adorable as the brave fairy Holly Short. You also had a centaur who could join Milli Vanilli. The dwarf Mulch Diggums (Josh Gad), who also took on the role of narrator at the same time, who’s actually not a dwarf and resembles Rubeus Hagrid. And there was even the suggestion David Bowie was an elf (Talking bout humor). That’s about it what I can remember from all personages. In general, however, the performances were not impressive or grand.

There’s also something to be said about the footage. They’ve put a lot of energy into it (maybe a little too much) and the film is packed with generally good-looking CGI. But a film about fairies, trolls, and dwarfs, who live in an underground hidden world, must look fairy-like and enchanting to me. They’ve decided to create a futuristic-looking fairy world full of flashy vehicles and modern buildings. And stuffed with a bunch of extras, busy decors, and an infinite number of props that you’ll need an extra pair of eyes to take in all the wonders. But don’t panic. This magical place is soon abandoned. Most of the film is set in the residence of the Fowl family. And there you can expect even more CGI (slightly less well developed). Perhaps it was quite an exaggeration when you consider the number of special effects. The only thing that impressed me was the jaw joints of Mulch Diggums.

No sequel needed for me.

No, I’m not a new fan of “Artemis Fowl” and I don’t feel the urge to discover the books. All in all, I found this movie version confusing and chaotic. I sometimes had the feeling that I was watching a new episode of “Kingsman” for young viewers. I didn’t fully understand the principle of the time bubble and was amazed bout how Artemis could unravel everything so quickly (But yes, extremely intelligent. Right?). Maybe me being a grownup has something to do with it. I guess youngsters will like it. Although, I think my two kids, who aren’t real book readers and never heard of Artemis Fowl, will be lost after 20 minutes. A re-watch might help better understanding the whole thing. I imagine fans of the books were very curious how Fowl’s world would look like on the silver screen. Anyway. I won’t wait for the sequels of this vague film. To put it mildly, I think the movie “Artemis Fowl” is a perfect fit for the current summer vacation that has become a disaster due to COVID-19.