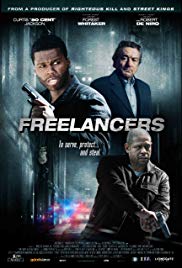 The son of a slain NYPD officer joins the force, where he falls in with his father's former partner and a team of rogue cops. His new boss, Sarcone, will see if he has what it takes to be rogue through many trials and tribulations of loyalty, trust and respect. When the truth about his father's death is revealed revenge takes him over and he won't stop until justice has been truly served.

Well … again another police flick with the well known corrupt/dirty cops subject. I thought it was only worth watching because Robert De Niro (playing on auto-pilot) and Forest Whitaker were performing in it. I think Whitaker is a sublime actor.

But despite these class actors this movie is as flat as a bad raised pie and this thanks to the miserable poor performances by 50 Cent. How he ended up in this film I don’t know but there’s a saying “
Every man to his own trade”. In other words, 50 Cent stick to your turntables.
It’s a film without any depth.

I saw a review on IMDB with this title: “Elvis was a better actor…”
Indeed ….