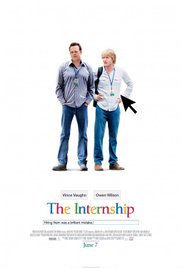 Billy and Nick are two representatives whose career comes to an abrupt end. To prove thatthey are not obsolete, they defy the odds by talking their way into a coveted internship at Google, along with a battalion of brilliant college students. But, gaining entrance to this utopia is only half the battle. Now they must compete with a group of the nation's most elite, tech-savvy geniuses to prove that necessity really is the mother of re-invention.

Can we talk about the on the line thing for a minute?

Vince Vaughn & Owen Wilson, the witty American duo. They performed together in “The Wedding Crashers“. Same routine, the same way of complementary conversations. Now they don’t infiltrate at a wedding where they pretend to be family-related, but they infiltrate the high-tech company Google, where they pretend to fit perfectly into the club of whiz kids who hang out there. Who says this isn’t a very devious way to put your business into the picture for the commercial part of our society, may join the large group of people who got fooled by the mega-company Google.

As a comedy I thought “The internship” was terribly disappointing. How is it possible this movie gets a 6.4 on IMDB ? Very simple , it’s pure American humor. And sorry, I don’t exactly like that kind of humor all the time. It’s a sequence of (would-be) tricky witticisms and puns. The volumes of conversations were so colossal that the subtitles sometimes couldn’t follow so I needed to rewind several times because I had missed almost a full chapter of the two jokers their flood of words. And I wasn’t laughing out loud a lot during the entire movie either. Not even a micro minute of the film. Bewildered, I read comments such as : “The movie was great from beginning to end. I laughed harder than I have in any recent comedy I’ve seen in the theater.“. I fear that this person hasn’t seen a lot of comedies in his life.

Now about the predictable events and cliches. This was a succession of predictable cliches. I admit that not all comedies can have an original design and get a new record in the category “comedy”. But this was really annoyingly bad and deeply sad. From miles away you could already see it coming how it would end. The mentor who strongly dislikes the two newcomers from the beginning and uses every opportunity to make fun of them and obviously finally turned out to be the one who believed in them, because he had to start from scratch also once and also saw that spark in them. Billy meets Dana (Rose Byrne) by chance, and you know immediately that this will result into something passionately.

The fact that they get stuck with a bunch of nerds, who they will teach moral values so they start believing in themselves and making the victory a reality, was also obvious. Then there’s the arrogant brilliant opponent who makes you look like a fool all the time. After one of them gives up because he starts realizing that maybe after all it was a big mistake to show up there, and then triumphantly returns to retrieve the loot. Sigh … Terrible ….

Bad version of “Revenge of the nerds”.

The most irritating character in “The internship” was Lyle. A terrible ADHD type of guy who probably made the most effort of all to look like a comedian and be as funny as hell. Would I be there personally, I would have certainly thrown my iPad at him after 5 minutes.

It’s indeed a modern and newer version of “Revenge of the Nerds“, but oh so bad …