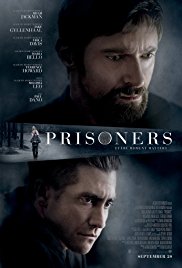 When Keller Dover's daughter and her friend go missing, he takes matters into his own hands as the police pursue multiple leads and the pressure mounts.

Pray for the best, but prepare for the worst.

My wife wanted to watch another thriller. And what a thriller it was ultimately. With a thriller of such high level as “Prisoners“, my wife starts to surf the internet so she can read the plot. She starts to get nervous and says in an indignant way that everything takes far too long and was terribly stretched.

“Prisoners” is a real nail-biting movie. It’s actually a mix of a psychological drama with heart-pounding suspense and a dash of horror. A mix of “Mystic River” and every top movie where a serial killer is hunted down like “The Silence of the Lambs” or more recently “The Frozen Ground“. The viewer is confronted with terrible questions of conscience. How far would you go when your dearest person is taken away? Would you dare to take the law into your own hands and commit degrading acts to find the truth? We are also witnessing the desperation and helplessness that an investigator of such crimes feels.

Hugh Jackman plays the role of the father in despair, Keller Dover, with a lot of enthusiasm. He shows a person torn by frantic rage and immense sadness because he first lost his lovable daughter and secondly fails as a householder who said he could protect his family against anything. His wife Grace, played by Maria Bello, gets in a depressed state as the days are progressing. Sleep and antidepressants are the only things that can still help her. The remaining son looks at it all from a distance and watches over Grace while Keller is constantly absent. We also get a view of the other family Birch with Franklin Birch helping Keller with his desperate plan. But their emotions aren’t as detailed unraveled as those of the Dover’s.

Magnificent acting by Gyllenhaal as well.

It all begins with the disappearance of the daughters Anna and Joy when the two families celebrate Thanksgiving. The two girls had played that afternoon nearby a white mobile-home parked in front of the door which is now no longer visible. A police description is passed around and that same evening the mobile-home is spotted on a parking lot of a gas station. This is the moment Detective Loki comes into the picture. For me a huge achievement in terms of acting by Jake Gyllenhaal. Amazing how he portrays the inspector. The passion, the tics and the way he puts his teeth into the case, while sometimes it seems as if it doesn’t really interest him. How careless he reads text messages and seemingly almost writes down nothing. When Grace makes a remark about that, he starts writing something in his notebook in a careless way. The fact is, that so far he has solved all the cases that were given to him.

They only cried when I left.

The driver of the mobile home is trying to escape and eventually arrested. The car is searched but nothing is found. What remains is the meaningless and confused explanation of the twenty years old Alex Jones, who has mental retardation and the IQ of a 10-year-old. Due to a lack of evidence, they need to release Alex, while Keller is firmly convinced that Alex is guilty and should not go unpunished. When Alex uses the sentence “They only cried when I left“, Keller loses control and forgets every Christian commandment although he normally holds on to that as a devout Christian. He even exceeds the bounds of humanity in such a way that a return is impossible.

And this is the most important moral question of this movie. Would you torture someone, knowing he’s guilty, so you can find out the truth? As a father, I’m convinced that the disappearance of your daughter is the worst thing you can experience. An inhuman nightmare. And after hearing the pronounced sentence, which is open to interpretation, I also would be capable of doing such a thing. Even if it should turn out that the person is innocent.

A poignant, terrible emotionally movie with a strong storyline.

The course of “Prisoners” is painfully and annoyingly slow. Maybe a cinematic portrayal of the excruciatingly long time parents of missing children needs to endure while waiting for positive news. It’s also logical and insightful put together.Successively, we have to deal with the discovery of the remains of a child rapist in the basement of a priest, a copycat who eventually seizes the opportunity to shoot a bullet through his brains and the final denouement which wasn’t totally unexpected but because of the prior still surprising. Several times I read about the fact that there are quite a few holes in the scenario, and things turn out to be wrong. I can’t put my finger directly on any flaw in this movie. The mystery of the maze is that I think there really isn’t one but just a perception in the mind of both a retarded boy and an abused boy. The latter looked at this image (also the medallion of the deceased father) for years. The only thing that I was still wondering about is the snakes. Do they have a particular symbolic meaning? Also, the unprofessional actions of law enforcement officers bothered me. The superintendent wasn’t much of a help in solving the case. And in such an important criminal case, I certainly wouldn’t leave the prime suspect unattended. And I think the aunt’s house would be searched through thoroughly.

Final conclusion: In my opinion, “Prisoners” was the best movie I watched in 2013. A poignant, terrible emotionally movie with a strong storyline. Engaged in a cinematic depressed decor with its greyish tones and perpetual drizzle and carried by a top cast. It shows that totally sick minds inhabit our planet. And religion is used again as an excuse to condone it.