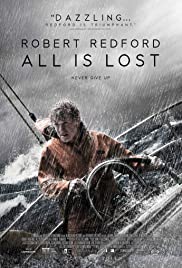 After a collision with a shipping container at sea, a resourceful sailor finds himself, despite all efforts to the contrary, staring his mortality in the face.


Normally I start a review with a quote from the film in question. That’s a bit difficult in this case since “All is lost” lacks any conversation. The only thing that would qualify is a frustrated cry of the famous F-word. For the rest it is just sloshing water, creaking wood, noise of hitting ropes, and lots of rain and falling water, you hear throughout the film. I can understand his frustration, because how the hell is it possible to have a collision between your pleasure boat and a container on that immeasurable ocean while doing an afternoon nap?

It’s difficult to call this movie unnerving exciting. I dare to say that it was dead boring after a certain time. The only decision I took after watching this film is that I’ll never set foot on such a boat and float around on the ocean with nothing but water around you as far as you can look. And in the worst case, not only around you, but also down at you.

Robert Redford, the icon of the white screen, had to carry the complete movie. He was, after all, the only living figure in this wet movie. Besides an unidentified hand at the last moment. No idea what RR‘s name was. Besides, there is a total lack of background information about his character. Except that we know where exactly he is sailing. I can’t complain about his acting performance because this was sometimes astounding. The only thing that amazed me was how stoically calm he was the whole time. A damn container makes a leak, no electricity or radio, a storm that shows up, the whole boat turns upside down, he hits his head against an iron pole, the boat is sinking, the lifeboat ends up in a storm, also turns upside down and then it catches fire … but does he keep a straight face? Yes sir! He’s a paragon of utmost restraint. I found this a bit exaggerated because I certainly would need a spare box of diapers in those circumstances!

The explanation might be that he’s an experienced sailor. Yet this experienced sailor had to read a  handbook on how to determine his position using the stars. And apparently, he never used a sextant before. There were times when it was so predictable. I said at one time it wouldn’t surprise me if “Jaws” would suddenly show up. Afterward, they wandered around his dinghy. And that his boat could sink at any moment, could not stop him to crawl aboard a second time. And of course the second time it went down.

The movie itself wasn’t that bad, but it wasn’t very entertaining either. And sailing seems to be a dull affair after all. The end was cheesy and followed the well known Hollywood guidelines. For me, the end would have gained enormously in strength, if at that ultimate moment RR wants to grasp the saving hand, he’d be dragged down by a great white shark. But that is too exaggerated and would be enormously ironic.