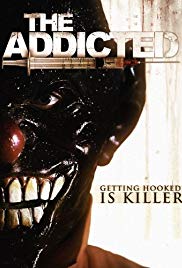 Four friends spend a night in an abandoned drug rehab clinic hoping to film some paranormal experiences. They soon end up fighting for their lives as a 25 year old legacy comes to haunt them... One of them is more involved than they would ever have thought...

Jezus Christ Liz, you got him

Sometimes you think no film can be painfully worse than the one you just watched. And then you come across something like “The Addicted“. Really anything you can think of is of a pitiful level in this movie and makes sure you’ll grind your teeth out of misery. Technically and in terms of the scenario, it’s all hugely laughable and abominable. Enervating poorly filmed. No originality and inventiveness. Stupid and incomprehensible story twists. Special effects from way back. Terribly boring in-between fragments and endless repetitions of the same idiocy. Even the fact that this is a low-budget B-movie can’t condone that it’s a pitiful and miserable spectacle. Even though I am a huge fan of non-commercial, low-budget creative inventions, I found that this monstrosity is not worth to use the word “creative”.

Not a bad start.

The start wasn’t that bad actually. It looked really cliched, but I was hopeful. I ignored the fact that again a well-known concept was used and I didn’t yield to the temptation to mull about the decline of the intelligence of today’s youth. Another gang of teenagers who feel the irresistible urge to visit some creepy building, this time an old drug rehabilitation center, for one night to fulfill a scary evening activity. “Why the hell would anyone want to do this ?” I wondered again. The quartet is a mixed bag of known impersonations. First, a dumb blonde, who of course thinks it’s just fun, and her fearless tough boyfriend. Then there’s a little less brave female member who only wants to return home and who is accompanied by a gallant young man who will watch over her. If only I could have placed a bet somewhere that the fearless blonde would be the first one to kick the bucket, I would have made a lot of money. After they forced a door (of which the lock is attached to a single ring. Sophisticated security), there’s somebody who gets out an Ouija board from under his coat. And then suddenly it starts to go woefully wrong. Lights explode (That was as frightening as a light that goes out in the Christmas tree at home), probably a sound technician starts to slam on iron with a solid hammer and then the first victim is drawn into the shadow and returns as if she had a kind of Olympic accident. The last victim was killed in a rather unique way.

And then it went down quickly.

But after this promising start, the level and credibility went down quickly. The way the movie continues defies all imagination and it seems as if they assume that the intellect of the viewer is equivalent to that of a mayfly. Inaccuracies, errors, and incredibilities follow each other steadily. After a night guard (why this poor sucker needed to guard this building which will be demolished in the future anyway, goes over my head) disappears, the journalist Nicole Hunter (whose father was employed in this center. How is it possible? What a coincidence.) has to make a sensational reportage and therefore decides to spend the night there together with her boyfriend and a couple of friends. They are going to use a lot of technical material to record any supernatural phenomena there. The fact that she concluded already that something supernatural is going on there, is mind-boggling in itself.

The keyword is “Moronic”.

And now a brief summary of some moronic things I’ve noticed. Breaking into this building seems so ridiculously easy. And apparently, there’s a huge instruction manual at the entrance because everybody knows where the generator is located. The lighting looks like Christmas decorations, I noticed immediately. Nicole has a shitload of high-tech film equipment, but she needs to attach a camera with tape to a gantry. There are countless attempts to get through the door where they entered the building. And yet it wasn’t until the end that Nicole discovered the grinding wheel which she uses on the steel door like a real metal worker (including a cigarette dangling between her lips). If you are good at maths and think logical it won’t be very difficult to guess who’s behind all these disappearances. The fact that this person interacts with a supernatural entity is completely ridiculous. It started to look more and more like a failed Scooby Doo cartoon. And it appeared as if the disgruntled spirit walked out of the PC game “The 7th Guest”.

Technically the film was sometimes painfully amateurish. Several times there was even incomprehensible camera work. For instance, the image was moved from a conversation to a side view of a car. Weird. Or during a phone call, the camera goes back to the start of the scene without any reason. The film is also filled with immense long fragments that look like a home video. Like the 3-minute fragment of a pleasant evening, the four friends spent at home, where they probably made the decision to pass the night in that building. 3 Minutes of footage with cozy chatting and smiling people who enjoy a glass of liquor. The whole thing was so meaningless that they repeated the same dreadful things many times. I’ve lost count of how many times they did the same route to the next floor using the stairs. And the fire doors were checked twice to make sure if it was possible to escape from there.

After the ridiculous ending and the attitude displayed by Nicole and her sister, my conclusion was made quickly. This is the most absurd movie I’ve seen in years. A film not worthy to be called horror and a mockery to the medium film in general. The only thing that gave me shivers when talking about this film, is the fact that I’ve seen it completely. My worst nightmare now is the idea that I would be forced to watch it again (harrowing scream).