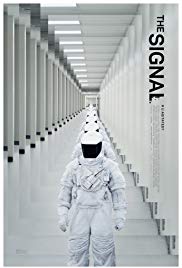 On a road trip, Nic and two friends are drawn to an isolated area by a computer genius. When everything suddenly goes dark, Nic regains consciousness - only to find himself in a waking nightmare.

I had no idea what this film was about when I started watching it. Looking at the movie poster, you can assume it has something to do with SF. But I didn’t expect it to be such a brilliant film. Compared with other great well known SciFi’s, “The Signal” is more of a modest movie. This will probably also be due to the small budget (4 Million Dollars). But despite this small budget, this magnificent indie has some very successful moments with hallucinatory special effects.

Sometimes you watch a movie and you are wondering all the time what’s actually going on. Eventually I had the same feeling as Nic (Brenton Thwaites) : groping in the dark, anxiously looking for the truth and feeling desperate. Nic was on its way to California, together with his girlfriend Haley (Olivia Cooke) and his best friend Jonah (Beau Knapp). Haley was planning to attend school in California. Something Nic wasn’t so happy about, resulting in ending up (probably temporary) their relationship. Along the way, they are contacted by a rival hacker, Nomad, who has put them in an awkward position already before. They decide to follow his tracked signal and confront Nomad. They end up somewhere in no man’s land in a dilapidated shack of a house. The next moment Nic wakes up in a kind of research center where everyone walks around in space suits. It seems like they are quarantined. He has no idea where he is, where his friends are and what is going on. He’s regularly interviewed by someone named Dr. Damon Wallace (Laurence Fishburne), probably head of this facility and responsible for the investigation. To Nic’s consternation Wallace announces that they are probably the victim of an EBE (Extraterrestrial Biological Entity).

Revealing more about this movie would be ridiculous. Actually, it is advisable to go and have a look at this film with as minimum information as possible. The fact that it’s a low-budget film, means that the success of this film doesn’t depend on the quality of SE’s (though there are a few slick-looking effects), but the storyline should be highly original and ingeniously fit together. While watching “The Signal” I could predict which way it was going and where it would end up (actually there are only two options to choose from), and yet I was surprised at the denouement. Despite the unknown actors (besides Fishburne) and the fact that this is only the second film directed by Eubanks, this is still a successful and refreshing SF. Do not expect “Star Wars” situations or “Edge of Tomorrow” action parts. The entire film keeps a perfect balance between mystery, successful visual images, surprising plot twists, strong performances and masterfully applied special effects.

A brilliant, magnificent SF which is pretty captivating through its simplicity and sobriety, and continues to fascinate. Some will thoroughly hate and reject it. Others (like me) will applaud it. I would recommend every SF fan to give this low-budget a chance and after viewing it, be overwhelmed by a creative whole with admirable visualization and an oppressive atmosphere. The great mystery is resolved in the end though. But some things are not explained in detail and thus remain unanswered. This will be frustrating for some. However, I am a big fan of such movies in which there are certain developments which are open to self-interpretation. But if someone can share his opinion about the part with the cow, I’ll be eternally grateful to that person …. “The Signal” will create a stir and I predict it’ll receive a cult status in the SF genre. I expect great things from Eubanks in the future! Something to look forward to.