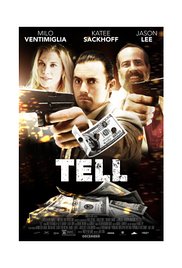 Ethan Tell is a small time crook who makes a big-time score when he steals 1 million dollars. Ironically, his life radically changes for the worse when he discovers that stealing the money was the easy part and he now must keep his partner, his wife, his parole officer, and two corrupt detectives from stealing it from him.

As a kid I used to think I was gonna be somebody, a model citizen raising a family in the suburbs.
Being shot at by a psycho with a machine gun, was not part of the plan.

I actually can’t understand that so many criticize this film and claim it’s so bad. Watching it would be a waste of time. It looks apparently terrible and includes some really bad acting. And also the script sucks and looks pitiful. Granted, it’s not “The Shawshank Redemption” or another Oscar winning quality movie. But at least it’s better than a monstrosity like “Sharknado“. Because of its short duration, airy tone and smooth narrative this film is ultimately ideal as a quickie. A simple, fast film to watch just before bedtime so you can leave to dreamland in a relaxed way.

Not an original concept but fascinating.

You can’t ignore the fact that it all feels a bit mediocre. It isn’t really miserable, but it isn’t really innovative either. The acting is at times something to enjoy and suddenly you are presented with some ordinary conversations. The entire concept isn’t very original but it remains fascinating due to the lighthearted storyline. It looks a lot like”A Fish Called Wanda” except that Wanda has been replaced by a girl called Beverly who isn’t as erotic and sensual as the so called Wanda. Also, the humor is of a different level. Yet it’s that kind of humor I usually can appreciate. Black humor with a dark, sarcastic undertone. Anyway, to my surprise I chuckled several times. “Tell” contained more humor in my opinion, than most humorous films that were released recently.

Milo Ventimiglia presents a rock-solid interpretation as the naive, dull Tell, who appears to own an excellent set of brains so he could come up with that cunning plan put. He wasn’t known to me but afterwards I found out that he played an important role in “The Divide“. Ultimately he’s such a character you sympathize with as the plot unfolds and on the other hand you start to feel sorry for him. I wondered if that Sylvester Stallone-like lip was something he’s born with or whether it was the result of the huge amount of whacks he received throughout the film.

Katee Sackhoff wasn’t immediately known to me either, until I checked her filmography and discovered that you could also admire her in “Riddick” (particularly certain perky body parts which are also explicitly shown in “Tell“) and she also plays an important part in “Oculus” (a film I still haven’t seen yet, much to my embarrassment).

Furthermore throw in two corrupt police officers, a brother in law who intends to take revenge, a probation officer of whom you don’t know whether he’s dead honest or not and a purse full of cash money that went up in smoke or survived the fire. All this ensured this to be an entertaining movie. A film that doesn’t excel directly in originality, but at least you won’t get stuck with that feeling afterwards that you could have spend your time more wisely.