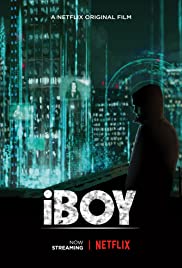 After being shot while calling for help trying to stop a violent attack on his high school girl, a 16 year old boy awakens from a coma to discover that fragments o f his smart phone have embedded in his brain, giving him superhero powers. He uses this knowledge and technology to exact revenge on the gang responsible for the attack.

This is your phone.
Did it miss all the important bits?
Well, it’s a brain, so we tend to think of all of it as quite important.

Every now and then I watch a movie and afterward I can’t decide whether it’s good or bad. “iBoy” is such a movie. I thought the initial idea was fascinating. The fact that Tom (Bill “Broken” Milner), got a bullet through his head, while fleeing from robbers, and his iPhone (which he was using while contacting 911) was shot into smithereens and fragments ended up in his brain, was in itself an original starting point. The result afterward is that thanks to the advanced technology of the iPhone, he’s able to make mental contact with communication networks and information technology stuff. Isn’t that breeding ground for an entertaining movie? But the moment he demonstrates how he controls a Volkswagen Golf remotely and uses the built-in radio to speak to the passengers, it was a bridge too far. As he takes control of any electronic device, it started to feel a bit absurd.

If however you manage to forget about that and you won’t concentrate on the nonsensical content (as a result of the nonsense-level decreases slightly), you’ll get an entertaining film about a sort of superhero (without the obligatory superhero outfit) who takes revenge on those who assaulted Lucy (Maisie Williams), the girl he has a soft spot for. Tom soon discovers that some local thugs are behind this. And thanks to his high-tech capabilities he starts making their life difficult. The images he sees because of his newly gained powers have a sort of “The Matrix” appearance. And slowly we see how the fairly timid and introverted Tom changes into a confident and resolute avenger who’s not one to be trifled with. The instruction video on YouTube that suddenly transforms Tom into a trained practitioner of the martial arts, is again such a ridiculous event you should forget about real soon. Just making sure it won’t spoil the fun.

“iBoy” is a mixture of different genres. Besides the superhero theme, there’s also a social tinged drama about less well-off citizens with youngsters choosing to follow the criminal path. The overall picture includes some intimidating loiterers who spend their free time with committing small crimes. Their habitat is also in stark contrast with the magnificent buildings opposite their drab apartment buildings which rise like minarets between the futuristic-looking luxury apartments where the yuppies of London live. And finally, there is a romantic part with Tom and Lucy growing close to each other because of the incident. These three sub-genres were intelligently intertwined.

Initially, I expected some sort of teen SF (something like “Project Almanac“) after reading its contents. And certainly, the choice of a childish superhero name paved the way for that thought. So, with some skepticism, I started watching this movie. But as the story progressed, my suspicion vanished and I could only conclude that the result was ultimately successful. And not only because of the stunning images of this metropolis and its nightly illuminations. Also, the performances captivated me. Bill Milner looked like a nerd and was sometimes too timid, but he excels in this role. Rory Kinnear’s contribution is rather limited, but in those few minutes he came across as a cold-blooded and determined criminal you shouldn’t underestimate. But especially Maisie Williams steals the show as the vulnerable and traumatized Lucy. What a beautiful performance. I only hope, no one will come up with the idea to make a film adaptation of someone whose PS4 exploded beside him. Or God forbid, an e-cig detonated in someone’s pocket. I can already imagine how this movie would look like.