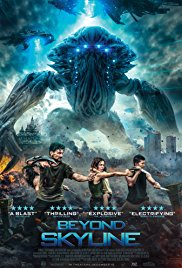 A tough-as-nails detective embarks on a relentless pursuit to free his son from a nightmarish alien warship.

“What the hell you think that was, man…terrorists or what, huh?
ISIS doesn’t have a fuckin’ spaceship!”

“Beyond skyline” is without a doubt  one of the better low-budget SF films I have seen in recent years. Visually, that is. In terms of content, I thought it was only half successful. Until the part that takes place in Laos, it’s acceptable. From there on story-technically it starts to be pretty absurd. As soon as Mark (Frank Grillo), a police officer on an indefinite leave, and his son Trent (Jonny Weston) end up in a thorny situation with earth being besieged by hostile aliens, the entertainment content of this action-rich SF is enormously high . Earthlings who are sucked into the air en masse. A futuristic spaceship where victims covered with slime regain consciousness and are randomly seized by tentacles that snatch their brains out. Armored Predator-like aliens controled by the implanted human brains. You get all that served in the first half hour.

The film resembles “War of the Worlds” with extraterrestrials who have the same goal as in “Independence Day“. And again a world population that tries to defend itself against an apparently invincible alien race. Of course this movie can’t be compared to these two blockbusters. But still praise for the CGI department because it sometimes was pretty impressive. Maybe they could have made the interior of the spaceship less dark. But the huge creatures which were used to move around with on earth, were beautifully designed. Almost the monsters that disrupted life on earth in “Pacific Rim“.

In Laos it looks kind of absurd.

It’s all fascinating and not boring until the huge spaceship crashes in Laos and Mark, along with train conductor Audrey (Bojana Novakovic), joins a kind of rebel army. These freedom fighters hide in chambers beneath Buddhist-looking Vietnamese temples which survived the bombing of the Vietnam War. Ultimately, it’s just an ordinary drug gang with an American scientist in their midst (I bet he played in “Apocalypse now” as well). Together with this scientist and the amazingly fast growing baby, saved by Mark and Audrey on the alien spaceship, they try to find a solution and thus save mankind. Absurdism surpasses your wildest expectations at that moment.

Not perfect but admirable.

From here on you can witness a self-rebuilding spaceship. And how these seemingly unbeatable and invulnerable-looking space figures are defeated by some Asian martial arts fanatics who are eliminating these armored Predator characters with the help of some Hong Kong Phooey movements. If you saw in the first half how destructive and unbeatable these aliens were, this is pretty ridiculous. So, it’s not that perfect. And you don’t get a real explanation about the reason for this invasion either. And yet it was all enjoyable and admirable what the makers did here. Creating such breathtaking fragments with such a limited budget is already worthy of applause. For the die-hard SF enthusiasts, this is definitely worth to watch.