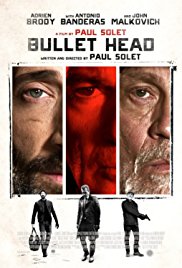 Three career criminals find themselves trapped in a warehouse with the law closing in and an even worse threat waiting inside - a nigh unstoppable killer dog.

What the fuck was that?
Beware of still water or a silent dog.

I’m sure they meant well while creating “Bullet Head“. But the road to hell is paved with good intentions. The end result may be called original and quirky, but there are also a few flaws in this film full of wellknown moviestars. Did Adrien Brody and John Malkovich (respectively Oscar winner and repeatedly nominated actor) opt for the easy money? I had that feeling sometimes about Antonio Banderas while watching him play in “Security“, “Acts of Vengeance” and “Black Butterfly” for example (although he’s not of the same caliber as Bruce Willis). So I found that quite obvious. Adrien Brody also has some misses to his name (remember “American Heist” ?). But I didn’t expect this from a legendary actor like John Malkovich (who stole the show in “Unlocked” and “Cut Bank“). But, looking back on this fairly unknown film, there’s more to it than just a clichéd tough-guy routine and flashy action scenes. As someone mentioned somewhere, it’s a mix of “Reservoir Dogs” and “Cujo“.

To be honest, I thought the main story was the least interesting. Three robbers who are forced to hide in an abandoned warehouse where they are waiting for new transport. To their horror they discover that the empty building was once a place where illegal dog fights were organized. And such a bloodthirsty specimen walks freely around in the building and instinctively starts chasing the three unfortunate criminals. Probably conditioned by animal-unfriendly practices and transformed into an insane fighting machine. And that’s when Antonio Banderas shows up. He’s the owner of this schizophrenic beast and looks like a tough guy from the criminal underworld.

They have a lot to tell.

This sounds promising. Trapped criminals and a foam drooling killer dog who loves to tear them into pieces. And a kingpin in a long black coat and leather gloves who’s waving dangerously with an automatic gun when he discovers that the three have accidentally found his money in this dilapidated building. Ultimately, this part of the film complements the most important theme. And that’s actually about these three robbers and their attitude towards animals. And also the mutual respect that can arise between humans and animals. “Bullet Head” is richly filled with dialogues between the three cornered robbers. The conversations between Adrien Brody and John Malkovich are entertaining. Especially the individual stories they tell each other are on the one hand hilarious and on the other hand very moving. The story of Malkovich and his tropical fish is extreme funny.

What’s that piano doing there ?

I don’t know why the dog got the name De Niro (which would also be the film title initially). Maybe because the dog has a muscular physique and a notorious reputation. Or because the name matches the star cast. The only one who doesn’t have an extensive repertory to his name yet, is Rory Culkin (who in my opinion delivered a better acting performance in “Jack goes home“). If you expect an action-packed crime film, you’ll be a bit disappointed. Apart from the exciting confrontation between Brody and the imposing fighter dog, with a piano drawing all attention, it’s mainly the dialogues that play a central role. All in all it was an entertaining film.