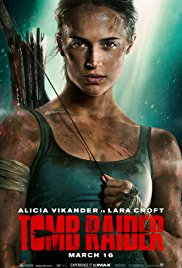 Lara Croft is the fiercely independent daughter of an eccentric adventurer who vanished when she was scarcely a teen. Now a young woman of 21 without any real focus or purpose, Lara navigates the chaotic streets of trendy East London as a bike courier, barely making the rent, and takes college courses, rarely making it to class. Determined to forge her own path, she refuses to take the reins of her father's global empire just as staunchly as she rejects the idea that he's truly gone. Advised to face the facts and move forward after seven years without him, even Lara can't understand what drives her to finally solve the puzzle of his mysterious death. Going explicitly against his final wishes, she leaves everything she knows behind in search of her dad's last-known destination: a fabled tomb on a mythical island that might be somewhere off the coast of Japan.

My opinion on “Tomb Raider”

“Vogel can’t find the tomb without me,
and since I’m dead and…

since you’ve burned the rest of my research,
he will never find it.”

I was actually looking forward to watching this new version of “Tomb Raider“. Not only because I had a lot of fun with the PC game years ago (and amazed by the used graphics in those days). And not because Lara Croft was a hot and good looking video game character. Equipped with a couple of huge boobs, wearing tight hotpants and she used to make those horny little cries whenever she bumped into something. No wonder she had a large male fanbase. But also because I appreciated the film with Angelina Jolie. And at the same time, I was curious how her successor Alicia Vikander would handle it. And to be honest, that was the biggest letdown of the film for me. Not that Vikander acted badly (Good acting isn’t really a requirement when playing a part in Tomb Raider. Right?). She just looked like an innocent teenager who first got slapped around during kickboxing and has fun with a chasing-game on her bike. And before you know it, she’s traveling to Asia to follow a trail that leads her to a place where her father supposedly deceased and turns into some kind of ass-kicking female action-hero.

So they got rid of the sensuality and the over-the-top femininity. Don’t get me wrong. I don’t think it’s really necessary, of course. But there should be a decent alternative instead. An intriguing and fascinating story, for example. Ultimately it’s a female version of “Indiana Jones“. But this time they’ve removed the facet of humor and replaced it with serious drama. Once Lara and her companion Lu Ren (Daniel Wu) arrive on the island, it’s just Lara who continuously runs, jumps, dives, fights and tries to survive. It wasn’t really exciting. And at certain times it seemed as if Lara possessed superhuman powers. I’m sure Wonder Woman would be jealous.

Perhaps it was intentionally done to present Lara Croft in this film as more serious and humane. For example, there’s this dilemma about her signing some contracts which are important for the continued existence of “Croft Holdings”. Particularly because signing these documents is actually a confirmation that Lara’s father is really dead. Something Lara stubbornly denies since she’s convinced he’s still alive. But is a movie like “Tomb Raider” suitable for using such profoundly human themes? Not for me. I’m not waiting for that when I watch this type of movie. I want adventure and mysticism. A battle for life and death between heroes and “the bad guys”. A trip through jungles and caves full of booby traps and difficult puzzles to solve. And that’s the positive side of this film. The film is crammed with (sometimes slightly exaggerated) action scenes and riddles. And that corresponds to what one could experience in the PC game

A film suitable for a relaxing movie night.

“Tomb Raider” certainly isn’t bad but didn’t really impress me. This flick is perfect for a relaxing movie night. Even though the character Lara Croft has become immensely popular over the years thanks to the pioneering games from the 90s and the lascivious performance by Angelina Jolie, this film doesn’t succeed in eliciting that same feeling. This shows once again that making a movie of a video game certainly isn’t an easy task.