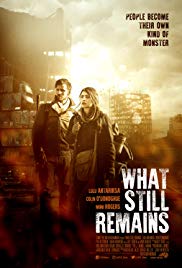 After the loss of her family, a young woman struggles to survive in a world long-since destroyed by disease; but when a lonely traveler offers her a place in his community, she must decide if the promise of a better life is worth the risk of trusting him.

Dreams give us hope.
And if we don’t have hope, then what’s the point in living?

After reading the synopsis of this movie, your reaction will probably be the same as mine at that time. “Jesus, not again another post-apocalyptic film in which the world’s population has been decimated to a handful of survivors, while the earth’s surface is plagued by bloodthirsty zombies or warlike aliens who are fed up eating salt-less potatoes already for years and start to plunder our natural salt mines here on earth“. Well, in essence, it sort of comes down to that, but the apocalyptic part isn’t really noticeable. You won’t see any zombie or alien. Then again, the epidemic that caused the extinction of the world’s population, has broken out 25 years ago. Perhaps that’s why the emphasis here is on the survivors instead of the Apocalypse itself.

The world was flooded with zombies. Or not?

Anna (Lulu Antariksa) is such a survivor. She’s 19 years old and therefore hasn’t really experienced the happening. She lives secluded in a fairly protected domain (although a wooden fence is not really something that could stop a zombie stampede) along with her deathly ill mother and her brother David (Roshon Fegan). But after a while, she stays behind all alone when her mother dies a natural death and her brother falls into the hands of a stranger who whistles like a cowboy. At first, it’s not clear in whose hands he has fallen. Afterward, you’ll come to know that there are wandering groups that are called “berserkers” and that hunt other people for supplies. What people should really be afraid of in this dilapidated society, remains a mystery throughout this movie.

The world is ruined. Let’s get religious.

So, don’t expect something similar to “How it ends“. It’s more like “Holy ghost people“. The day Peter (Colin O’Donoghue) apparently accidentally turns up at Anna’s house, it seems as if he has a way out to a more worry-free life for Ann. He’s the co-founder of a religious commune that offers protection and friendly companionship. Something Anna needs, now that she’s alone and lonely. The calmness and kindness that Peter exudes (as befits a true spiritual leader) convinces her. She didn’t know there were some flies in the ointment. Eventually, it seems like she was invited for very different reasons. And before she realizes it, she finds herself in a similar situation. Kind of imprisoned. Only at a different location.

It’s the end of the world as we know it.

“What still remains” isn’t an exciting film with nerve-racking confrontations and fierce life-and-death battles. It’s rather a socio-drama and a “coming of age” in a world that tries to get back on its feet. It’s a story about trust and mistrust. And, of course, the revival of isolated communes where individuals position themselves above others in a certain way, in order for them to sail a safer course. That there’s a religious aspect, is quite logical. In the face of adversity, there’s always that moment when people start focusing on a higher power. The fact there are clever people who then misuse this in their favor and come up with their own form of religion, is also not earth-shattering. The most positive aspect of this film is the interplay between Lulu Antariksa and Colin O’Donoghue. For the rest, it brings nothing new and you get an I-have-seen-this-already feeling. Only I caught myself humming “It’s the end of the world as we know it“. Only the phrase “And I feel fine“, felt out of place.