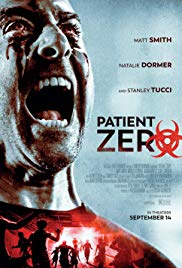 After an unprecedented global pandemic turns the majority of humankind into violent "Infected," a man gifted with the ability to speak the Infected's new language leads the last survivors on a hunt for Patient Zero and a cure.

The virus has laid dormant in us since the beginning of time.
And the extremes of modern stress have caused it to awaken.
We’re all, in essence, Patient Zero.

There you are! Another zombie movie. And also one where they tried to use something unique, in order to give it an original look. Now, to be honest, I found the idea they’ve used to be highly amusing. An infected person who’s still functioning normally is being used to gather information. And the interview technique used was also a nice touch. Of course, the highlight of the film is the moment Stanley Tucci shows up.

Let’s play some music and see how they react.

Unfortunately, the initial idea isn’t very original. For the umpteenth time, planet earth is the victim of some kind of epidemic, causing the majority of the population to transform into something inhuman. And just as with a realistic Ebola epidemic, they start looking for the one where it all started with. The so-called “Patient zero”. In “Outbreak” it was an imported monkey. In “World War Z” they also tried to trace the origin of a virus. In this film, the army goes on a manhunt (if you can call it that) and try to detect this crucial person with the help of imprisoned infected persons. There it is that Morgan (Matt Smith) uses his unique gift. And his collection of vinyl records is an extra tool to help him with that.

Zombies being a more evolved species, sounded kind of intriguing.

Now, I’m of the opinion that zombies are brainless, bloodthirsty, wandering beings whose minds are so affected that they lead a catatonic existence. Them expecting such a creature to point out where the person sought is located (probably staring off into space in an apathetic and comatose way), makes it clear how stupid the set-up is. The fact that these mutated individuals are superior to the human race and the whole reasoning about the pent-up anger about all sorts of misfortunes now erupting as a climax, sounds plausible and even interesting. But besides these philosophical musings, which are put forward in an excellent way by the professor (Stanley Tucci), there’s nothing else exciting to be found in this average horror. To be honest, this film fell short in several areas.

This flick fell short of its mark.

The acting of Stanley Tucci and the conversation between him and Matt Smith are actually the only highlights in this film. The rest is too limited, too cheap and too superficial. The story itself is too narrow-minded. They also added a love affair to it to embellish it, while it’s not really relevant. The search for the ultimate antidote to save a loved one is added for sentimental reasons. They limited the film to one dark location. And the zombie part, isn’t frightening either. And I constantly had the feeling as if this was a pilot of a new television series. Something like “The walking dead“. Hence probably my slightly apathetic attitude while watching this film. I’m not a big fan of series. And if you think about it properly, this scenario resembles that of “I am legend” for the most part. And that for me is unacceptable and cheap.