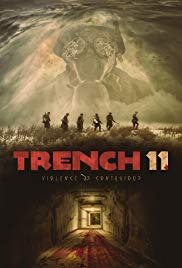 In the final days of WWI, an allied army unit led by a shell-shocked soldier is sent to investigate a mysterious abandoned German facility located deep underground. What they find is fate worse than death.

The air is moving.
Fritz left a door open somewhere.

Did the creators of “Trench 11” know that the film “Overlord” is going to be released this autumn? Or did they want to beat film studio “The Asylum” and be the first one to deliver a low-budget horror in which American and English soldiers face German zombies? The biggest difference with “Overlord” is the world war they’ve chosen. “Overlord” is about American marines after D-day in the 2nd World War, while “Trench 11” is situated during the 1st World War. So no Nazi Germany.

No magic tricks from the CGI department.

And another difference is the footage. Just look at the trailer of “Overlord” and you’ll easily notice that there’s a difference in the budget for the department “Special Effects” and “Computer Graphics”. Film producer “Carousel Pictures” doesn’t seem to have a CGI department. And in terms of special effects, it’s not all high-tech what you’ll see. It’s limited to practical effects (though excellent ones) and stop-motion techniques.

In a strict sense, this isn’t really about zombies. You can call it chemical experiments that went out of hand. Somewhat like what happened in “Attack of the Lederhosen Zombies” where a chemical product for artificial snow was the cause of all the misery. What Lt. Berton (Rossif “son of Donald” Sutherland) and the group of American soldiers and English officers encounter in the underground tunnels of a giant German bunker in the forests of Argonne, are infected guinea pigs. Test subjects who underwent some kind of medical experiments, after which they changed into ruthless savages whose bodies are stuffed with wriggling spaghetti. A type of parasite that infects the frontal lobe of the human brain, causing the victim to lose his personality and no longer knowing the difference between right and wrong. The result is a few bloody confrontations with somewhat deliciously gross images.

Exciting and funny at the same time.

Maybe the bloody scenes look a bit cheap and old-fashioned (even though I like to see a bursting skull from time to time), yet they managed to create a threatening atmosphere. Of course, the location is something that’ll take care of that. Underground tunnels are suitable to provide dark, claustrophobic images. A creepy labyrinth full of corridors where you can encounter an insane mutation at every corner. So the tension is certainly present. And humor is also present at certain times. Even though I think this was not done on purpose. Like this conversation, for example:

How do I know I’m not infected?
What are the symptoms?
Begins with fever. You become increasingly violent.
How do you feel?
I feel like blowing up something.
That is a symptom

Unfortunately, the characters are a bit clichéd. You have another know-it-all, authoritarian superior (Ted Atherton) who doesn’t tolerate contradiction and keeps coming up with excuses or pronounces threatening language when exercising his authority. They are accompanied by a trio of seasoned American soldiers goosed up on adrenalin. While the English officers bring out an authentic English teapot, these gentlemen sniff a line of coke (or something similar) to enter the battlefield fearlessly and more alertly. The most colorful and atypical figure here is Sgt. Pronger (Jeff Strome). That facial expression shows how insane this war has made him. And then you have the German sadistic officer Reiner (Robert Stadlober) who is a fervent supporter of chemical warfare. A bit similar to Dr. Maru from “Wonder woman” or Red Skull against who Captain America fought. But Reiner is less machiavellistic.

It’s not an extraordinary horror. But it’s not bad either.

“Trench 11” won’t become an instant classic in Horror Land. But you can say a lot of positive things about it. Admittedly, some of the actors aren’t particularly overwhelming. And at times there’s silliness and there are some improbabilities (but most horror movies have that). I found the statement of Capt. Cooper (Luke Humprey) about the entire US Army (“Whatever Jennings is doing down here is important enough to secure the full cooperation of the American army. How else could he get a whole division down her?”) a bit strange. I suppose that a division from the American army consists of more than three soldiers. But despite these hiccups, I thought this war/horror film quite successful.