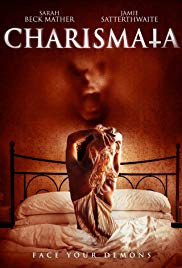 Psychological horror about a police detective whose sanity begins to unravel as she investigates a series of brutal ritualistic murders.

Even if you never had to learn police work like the rest of us plebs,

anybody with a TV knows that it takes three bodies to make a serial killer.

You know what I’m saying, you’re just being pedantic.

Take the brilliant movie “Se7en” and replace the two inspectors Somerset and Mills with a duo that can’t get along and where one of them is female, then you get something similar as “Charismata“. Only it’s far from brilliant in terms of acting and the narrative. And even though Mills was a bit cocky and a wiseass in “Se7en,” there was also mutual respect. That doesn’t really apply to Rebecca (Sarah Beck Mather) and Eli (Andonis Anthony). Eli is an arrogant and obnoxious guy who always sees an opportunity to belittle his partner.

The movie is filled with unfriendly people.

But honestly, most people in this film are blessed with an ugly personality. The two inspectors, who assist in the investigation, constantly spit sexist statements and never take Rebecca seriously. She’s the daughter of the commissioner. So remarks about her job being dropped in her lap, are commonplace. Even the pharmacists are terribly unfriendly and snippy. I’m starting to believe the U.K. is inhabited with bad-tempered and unfriendly people. But believe me, the constantly unfriendly atmosphere started to annoy me.

Also in “Charismata“, they have to deal with an insane serial killer. The victims follow each other rapidly. The one murder even more horrifying than the other. Unfortunately, the first one shown, is the only one that’s off the same level as those in “Se7en“. A dark room in a dilapidated building where the rats have feasted on a half-decayed corpse. This looked fairly realistic and horrifying. The satanic images and carved numbers in the wall make it mysterious. Unfortunately, the design of the following victims wasn’t so successful. They were just stand-ins covered with lots of fake blood. Probably the budget for special effects was already exhausted after the first corpse.

Michael Sweet. Such a charming person.

What are the most successful aspects of “Charismata“? First, there’s Jamie Satterthwaite, who plays the snobbish Michael Sweet. A yuppie and partner of a company trading in real estates. And their estates are mostly the location where a victim is discovered. Michael Sweet is for me the most sublime appearance in this movie. His charisma and mysterious smile. He’s as innocent as a lamb and laughs off every accusation. A character who could easily play the role of Bateman in “American Psycho“.

The next positive point in this movie is the way in which Rebecca’s mental instability is portrayed. The reason why she has a psychological problem is solidly substantiated. A messy divorce. A brutal ex. Selling her apartment goes awry. Unfriendly colleagues who treat her disrespectfully. And then also a stressful case with a serial killer with nauseating crime scenes as a result. Then there’s the fact that she takes antidepressant medication with a lot of alcohol. So it’s no surprise she’s having hallucinations. And those hallucinations are worked out magnificently. No exaggerated effects and some adequately executed scare moments. Or aren’t these hallucinations?

Is “Charismata” a decent film you should definitely watch? Looking at the plus and the negative points, you’d say that it’s well balanced. Such that it can be called an average film. Indeed. Even though the acting is sometimes of a “Coronation Street” level and the story is rather superficial, you can’t say it’s extremely bad. But that feeling is completely undermined by the terrible, meaningless ending. It’s flat n’inane beyond belief. The run-up to this wasn’t bad. It even became gross at a certain moment. But the denouement creates some forehead-frowning, after which you wonder why on earth you’ve watched it. It seemed as if the makers realized they needed an end and there was no creative inspiration left. Too bad, because the film surely had potential.