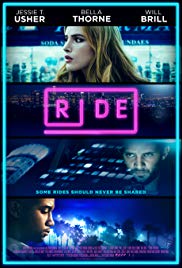 A cautionary tale aimed at a technology-obsessed society. When James, a ride share driver, picks up the charismatic but manipulative Bruno, the rider talks him into picking up his previous rider Jessica, and a normal night out in LA becomes a psychological war for survival.

James, I am not gonna be the force in your life that prevents you from hanging out with this girl tonight.

meant to kiss her tonight.

This film had everything to make it an extremely exciting end product. A fascinating storyline with a surprising twist. A sympathetic protagonist (Jessie T. Usher). Bella Thorne as a co-player. And a crazy opponent who has a nice surprise. Plus a short playing time of fewer than 80 minutes, which means that the film has the same functionality as a bag of paprika chips. It’s not real food but as a quick snack, it fills your hungry stomach. And it’s also damn tasty. Only one crucial item was missing. And that’s credibility. There are some developments that are too ridiculous for words. And that’s not all. A surprising end was also missing. An unparalleled denouement through which you forget all the nonsense and moronic situations. The disappointment about the denouement was so big that you’ll forget about the plus points I just mentioned. Unfortunately, because there was still a lot of good stuff to discover.

First of all, Bella Thorne. Well, I think that I have a thing for her. When I first saw her in “Shovel Buddies“, I was immediately hooked. A beautiful appearance with a lovely look with a pair of sparkling eyes. There was no doubt. I had to watch all the films in which she played. Unfortunately, I finally forgot that commitment (like all my New Year’s resolutions) and I only admired her again in the not so tremendous “I still see you“. At first, I didn’t really feel like watching this movie because of the movie poster. With that pink neon-like title I immediately thought of “Cocktail“. And that wasn’t exactly a movie that impressed me. It was only when I discovered the name Bella Thorne that I didn’t hesitate for a second to watch it. And now I also know that the name Bella Thorne is no guarantee for an excellent film.

This Bruno guy is a pain in the ass.

Everything revolves around James (Jessie T. Usher), a starting actor hoping for a breakthrough (something more important than a henchman in “Agents of S.H.I.E.L.D” anyway), and forced to take a job as a taxi driver. Something similar to the “Uber” services. Only here it’s the “Ride” app that takes care of new customers. And the first customer is the lovely Jessica (Bella Thorne) who’s going for a night out with some friends. The animated conversation between them made her invite the sympathetic James for a drink after his shift. But first James has to pick up a certain Bruno (Will Brill) who has an arrogant attitude. You’ll grow an antipathy towards this man from the very beginning. A dreadful, annoying and unpleasant person who cannot specify a destination. He’s reminded five times that there’s no meter and that tips or extra money aren’t accepted. And he’s also so persistent in his argumentation that he can convince James to ask Jessica to come to a party on Malibu (including hot tubs).

It all felt ridiculous at a certain moment .

When everything seems to go smoothly, with the necessary silly jokes from Bruno, it turns out he has a completely different plan in mind. Before James and Jessica realize it, they are in a life-threatening situation. A game of manipulation and dominance. A psychological cat and mouse game in which both innocent passengers are forced to commit criminal offenses. But as the film progressed, the improbabilities accumulated. James had plenty of opportunities to end the mad ride. A whopper of a revolver handed over twice and not once use it to turn the enforcer into a target practice! If it was me, that guy would already have looked like Swiss cheese with holes in it. And most of all I had to laugh with the hiding place that James and Jessica chose. It was as if they wanted to be found quickly. So stupid.

But it’s above all the denouement that makes the entire film collapse like a plum pudding. The only reaction that occurred to me was: “That’s it?” It’s so disappointing that I wondered why I actually made the effort to completely sit it out. Fortunately, the film had a limited runtime. But just like Bruno, the film doesn’t know which direction it wants to go. In short, a not so very successful film. And the sometimes beautiful, nocturnal images of Los Angeles won’t fix that. Fortunately, Bella Thorne was in it.