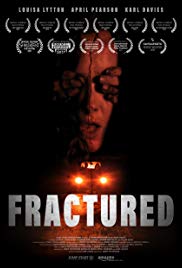 When Rebecca and Michael decide to take a weekend getaway and drive into the isolated countryside, they arrive at their cottage unscathed, but Rebecca can't help but feel like someone is watching.

Who the fuck are you?

Are you a fan of home-invasion movies where the concept of revenge keeps coming back, then this might be a must see for you. I say “maybe” because you’ll have to wait patiently for the first forty minutes before you realize what it’s all about. The film “Fractured” is unquestionably masterful when the surprising twist kicks in. Trust me on this, it ensures a completely different view on the story. Something that suddenly gives the two main characters Michael and Rebecca (Karl Davies and April Pearson) a completely different personality. A unique momentum in an otherwise very clichéd story. One that stimulates your curiosity so that you’ll sit up straight again.

It all starts quite pleasantly with a young couple driving an old Volkswagen beetle on English country roads in the middle of the night. On their way to a cottage in the country so they can enjoy a relaxing weekend far away from the stress. I suppose. A flat tire makes sure tension increases with Rebecca, in particular, reacting rather ill-tempered. Tiredness apparently gets to her. And when they stop a bit later at a gas station, the atmosphere becomes grim. Partly thanks to the strange behavior of the attendant. And so the pleasant atmosphere is gone. At that time, I thought these young people would be abducted by a psychopathic, cannibalistic family living in this no man’s land and waiting for innocent tourists. Something similar as in “The Texas chainsaw massacre”.

Look out! Here’s the twist.

Once arrived at the country house, everything seems to be going smooth again. The luggage is being unpacked. Rebecca takes a bath as relaxation. And Michael prepares a nice dinner complete with candles and wine. A romantic moment to recover from the long trip. But Rebecca has a feeling someone’s lurking around and that they are constantly being observed. Her shoes are suddenly gone without a trace and shadows move through the house. And at that moment I thought it was something supernatural that was happening here. Until the film makes a leap back in time and the sneaky twist presents itself. And as the second half of the film progresses, everything becomes a bit clear and you gradually begin to realize what’s really going on. Elaborating more is an unacceptable fact. I certainly don’t want to deprive those who haven’t seen the film of the pleasure of watching it.

Not original, but recommendable.

So this low-budget English thriller is full of plus points. Even though the budget is limited, I thought that the camera work looked solid. And the location where it all plays out was limited but adequate. Perhaps the fact that it was mostly dark, was a bit exaggerated. I still wonder why people go exploring in a house in the middle of the night, without even turning on the lights. The acting was also of a decent level. I thought the acting of Karl Davies and April Pearson was extremely credible. The chemistry between the two was realistic. I especially liked April Pearson (and not just because she looks damn good). The way in which she plays her personality bears witness to certain professionalism. And then also some (minor) negative points. The story itself isn’t really original (except the twist of course). It feels repetitive at a certain point, which is self-evident because of the required flashback. And the end is somewhat disappointing. But the movie is still recommendable. Thanks to the short playing time, this is something you can enjoy in between.