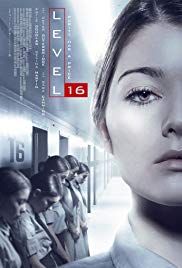 In a highly regimented boarding school, a pair of students discover that things are not as they seem.

Each hall has its top girl

and in this hall it’s me.

“Level 16” really is an original film. Perhaps fairly minimalistic and limited in terms of storyline, but grand when it’s about the denouement. The moment the idea behind it all becomes clear, it all feels rather lurid. The impact on your feelings is immense when the true nature of the girls’ boarding school is revealed. Level 16 is the final stage the girls can reach in a colorless building of the firm Vestalis. The last level before they get a chance to be adopted. And in preparation for that happy day, the girls are drilled like soldiers. They are told that girls should be clean, considerate and dutiful. The girls of the Vestalis Academy must be modest, honest and patient. But loyalty, in particular, is something very important.

In the meantime, the girls fantasize about how they’ll observe a full moon at night, the day they leave the building. Because they never leave this building. Allegedly, the school has saved them from the toxic fumes in the outside world. Was there an apocalyptic war? Well, that remains a mystery. As well as the exact place where it all takes place. You can only suspect that it takes place in a Slavic country when you hear the conversations between Miss Brixil (Sara Canning) and the Terminator-like guards. Guards who are always summoned when one of the girls doesn’t follow the agreed rules. Like performing their evening ritual where they clean their faces according to strict instructions. Breaking such a rule has consequences for the unfortunate one. A trip straight to a lower floor where a painful punishment awaits. something Vivien (Katie Douglas) experienced personally when she wanted to help her friend Sophia (Celine Martin) at level 10. Not surprising that she reacts aggressively when she is reunited with Sophia on Level 16, 6 years later.

From the outset, you have a feeling that this is a kind of concentration camp with Miss Brixil as a real drill sergeant. She was a bit like Ilsa (from “Ilsa, she-wolf of the SS“). Applicable because her husband or boyfriend Dr. Miro (Peter Outerbridge) could easily be compared to Josef Mengele. And both rule over this artificial, dammed world where they are in control as true tyrants. The girls are psychologically brainwashed. As hypnotized they are watching a pre-war television set where the virtues and vices are listed in a cold-hearted way. And with the regularity of the clock, they are summoned to take a dose of vitamins that are necessary for a healthy body and to prevent diseases. After all, it’s Sophia who confides in Vivien and tells her that not everything seems the way it should be. And that the institution has a very different purpose in mind that they claim.

Maybe it all looks a bit too strict and sterile. And the pace of the film will be a bit too slow for some. What impressed me was the acting and empathy of the girls. Katie Douglas, in particular, was a pleasure to see. Not only because of her angelic and spotless appearance. But also because of her acting. One moment she looks very serious and fearful like a trapped guinea pig. The next moment there’s this innocent and spontaneous smile because of a short-term reward. One moment she’s the very milk of human kindness. And next, we see her as an ice-cold fellow student whose sole purpose is to succeed in what she’s trained to do. To be a good girl who will be chosen to be adopted. And she’ll stop at nothing to achieve that. Just simply exquisite.

YA movie for adults.

The film “Level 16” is difficult to categorize. On the one hand it has a dystopian character. On the other hand, it also has horror elements. And perhaps you can also see it as a socially critical film in which the concept of ideal female beauty is being criticized. It also resembles a psychological thriller in which you can see how isolated individuals react in certain circumstances (similar to “The experiment” for example). Maybe the pace was on the low side, but the denouement makes up for a lot. “Level 16” surprised me in a pleasant way. And the magnificent acting is also part of it. “Level 16“, a “Young Adult” movie for adults.