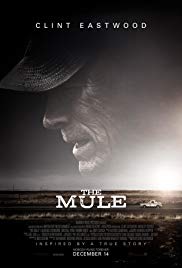 Family’s the most important thing.

But first position should be family.

“The Old Man & the Gun” might be the piece de résistance of Robert Redford. “The Mule” might be the grand finale in Clint Eastwood’s career. This legendary actor looks shockingly old. I even felt sorry for him at certain times. The way he was treated is inconsistent with the image you have of him in other movies. I hoped that as a veteran, he would use a few handy fighting movements to silence the arrogant cartel members. Forget it. Clint Eastwood stayed loyal to his role as a submissive and defenseless elderly person who does what he’s told. But you can rest assured, Mr. Eastwood is and remains a brilliant and respectable actor. There’s no praise great enough when it comes to his acting talent. And this tough, almost 90-year-old man may slide the director’s chair under his weathered butt for many years because as a producer he made a few great movies as well (such as “Trouble with the curve”, “Sully” and “American Sniper“).

It’s not a nerve-wracking film.

Not only does Eastwood play the leading role in “The Mule“, but he also produced it. The pace Eastwood uses here is striking. Everything goes smoothly, quietly and calmly. It’s the age, I guess. In any case, he takes his time to tell the story. It didn’t bother me at all because it’s a pleasure to see how the Eastwood actor does his thing. Even though he’s someone who has reached a blessed age, he still knows how to impress as an actor. More than the film itself actually. Not that it’s a really boring film, but there’s not much action here either. I have the impression Eastwood is using this film to apologize to his close relatives for being frequently absent because of his busy career. Perhaps that’s why his own daughter Alison Eastwood was assigned the role of his movie-daughter.

No quality time with the family.

Eastwood plays the war veteran Earl Stone. A famous florist who, after his company is declared bankrupt, has to find another way to earn some money. Stone is an old-fashioned grump who lost contact with society apparently. Hence his misplaced comments about the internet and the way he addresses an African-American family. He was a true bon vivant and charmer in his younger years. Someone who led his own life in his own way and had little or no time for his family. That’s why he’s not welcomed with open arms by his wife Mary (Dianne Wiest) and daughter Iris (Alison Eastwood) when he returns after the internet ruined his business.

From flowers to drugs.

The only one who receives him with open arms is Rico, a friend of Earl’s granddaughter, who tells him about a seemingly simple job that pays good money. And before he realizes it, he’s a drug mule driving around for a Mexican drug cartel. His innocent appearance and stoic calmness ensure that Earl doesn’t appear on the radar of Detective Colin Bates (Bradley Cooper). While this motivated agent decisively searches for “El Tata”, this cheerfully singing grandfather transports kilos of cocaine stacked between pecans in the trunk of his car. Colin Bates even gets a free life lesson from Earl somewhere in a diner along the highway.

Of course, drug smuggling is the main subject of this film. A story based on true facts where 87-year-old Leo Sharp was caught with smuggling 90 kilos of cocaine. This film also shows how ruthless drug cartels are. But it’s also a film about regret, remorse and the frantic attempts to heal lost family ties. Perhaps it felt kitschy and corny at some point, but that was compensated by the subtle humor that seeped into the dialogues (a lesbian motorcycle gang and comparing a Mexican authoritative figure with the “Fuhrer”). Maybe a bit daring at certain moments, but I could only make approving chuckling noises. “The Mule” certainly isn’t Eastwood’s best film and the ending is a bit too abrupt. But it was still a pleasure to see movie icon Clint Eastwood at work again.