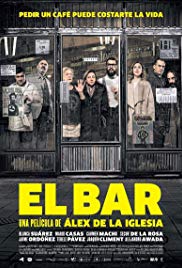 In bustling downtown Madrid, a loud gunshot and two mysterious deaths trap a motley assortment of common urbanites in a decrepit central bar, while paranoia and suspicion force the terrified regulars to turn on each other.

We have to stick together and stay calm.

“El bar” pretends to be a thriller comedy, but falls short on both levels. The film leans rather towards the comedy genre. But in terms of thriller, it’s a bit too weak. What’s actually the ultimate cause of the incident witnessed by a number of persons, isn’t really clear in the end. Are they witnessing a terrorist attack? Or is it the umpteenth viral outbreak? Or are we going back on a zombie tour? If the latter were the case, the film would fit more into the horror genre. It’s not clearly explained. But I think it’s a combination of these assumptions. When you look at the opening sequence, full of microscopic viruses and other whimsical creatures from the microbial world, you are already assuming that some pandemic will break out. But again, it isn’t really clear.

I don’t know why, but I enjoy watching non-English films. Not that I’ve seen many foreign films because the frequent reading of subtitles remains a disturbing factor for me. So after the Finnish film “Euthanizer“, the Argentinian “Los Olvidados” and the Russian film “T-34“, I didn’t hesitate to watch this film. Even though I didn’t understand one iota from the start (because my knowledge of Spanish is limited to the words “cerveza” and “paella”), the film still managed to hold my attention. And not only because the beautiful and sensual looking actress Bianca Suárez appeared immediately on screen as she makes her way through the busy streets of Madrid. It’s also because of the energetic intro.

The way in which the film jumps nervously back and forth between the soon-to-be victims creates an intense feeling. Not only the rapid pace of the film but also the busy gesticulating of the main characters give it a fiery character. Maybe it’s normal for people from the big city. Or it’s something typically Spanish. In any case, every spoken word is shouted out here, as if one wants to be sure that everyone has heard it. No quiet, but excited and sometimes theatrical-looking conversations. Only at the moments that the shouting guarantees a deadly outcome, the individuals calm down and the hot-tempered Spanish characters go into whisper mode.

Personalities change in a life-threatening situation.

In itself, the terrible event of shooting two innocents isn’t the main focus. It’s the way personalities change in a life-threatening situation. Admittedly, we’ve already seen this in several other films. A film such as “The Divide” for example. At first, it’s all friendly, despite the differences in character and temperament. And then the situation becomes threatening and hostile. The changing moods make this film interesting enough. Just like in real life, bringing together characters of different backgrounds creates tensions on the one hand and interesting developments on the other. It’s quite obvious that a person as Elena (Bianca Suárez) doesn’t frequent such an establishment as this bar often. She just stumbled in to charge her mobile phone. This well-dressed high-society looking lady soon realizes that she’s among people of a completely different level in society.

A colorful group of persons.

The bar is run by a tough lady called Amparo (Terele Pávez) who won’t let herself get pushed around. Then there’s the gentle and a bit naive looking Satur (Secun de la Rosa) who helps in the bar. A few guests are already present. First, there’s nervous Trini (Carmen Machi), a housewife who spends her days at a slot machine. Next, there’s Nacho (Mario Casas). A creative type of a guy who works for an advertising agency and who immediately falls for Elena. There are also two middle-aged gentlemen (Joaquin Climent and Alejandro Awada). And finally, you have Israel (Jamie Ordóñez). The most eccentric and most colorful figure who comes rushing in at the last minute. A homeless clochard whose unkempt appearance and strange behavior improves the humorous content of the film.

How could she squeeze those boobs through the hole?

Once the characters are introduced, one is ready for the radical event and the guessing game can start in which suspicions and accusations swing back and forth. What started as an average day is soon replaced by an atmosphere of dismay and panic after the two innocent men are shot. However, when these two lifeless bodies disappear and an obscenely fat dead man is found on the toilet with a collection of syringes, the whole mood changes into hysteria and fear. The very last chapter shows how survival instinct and the law of the strongest takes over. And all this is shown with the necessary humor and agitation.

The highlight is, of course, the escape plan through a drain hole. Anyone who’s secretly guessing at the outset how the graceful Elena looks like under her stylish clothing will be rewarded. And yes, I guessed she would be wearing sensual-looking garters. I only wondered how she succeeded in what Israel tried to achieve in vain, despite the fact she a nice pair of breasts which are in the way.

A pinch of Dark Humor.

Even though “El Bar” is entertaining and intense at times, it’s a movie people will forget easily. You can call this film satirical. And yet it also gives a realistic view of our current society. A society in which terrorist attacks are the order of the day. And I can imagine how anxious people react in such circumstances. The humor, on the other hand, is sometimes razor-sharp and subtle (I had to chuckle during the scene with the suitcase). The most striking acting performance may be attributed to Jamie Ordóñez. The way in which he portrays this marginal is simply brilliant. His appearance contrasts sharply with that of Bianca Suárez. A kind of “Beauty and the Beast“. The sensual Spanish beauty in front of the ugly, unkempt hate preacher and somewhat crazy oboe. So if you love one-location movies stuffed with emotions and a pinch of dark humor, you should give “El Bar” a chance. It’s definitely worth it.

You can watch The Bar (El bar) on Netflix now!