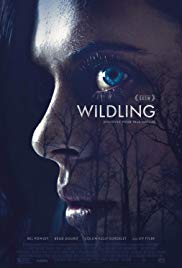 A blossoming teenager uncovers the dark secret behind her traumatic childhood.

Do you want to hear a story?

Do you want me to tell you about the Wildling?

“Wildling” is a peculiar film. It’s hard to put a specific label on it. One moment it feels like a teenage movie about a freshly emerging love. On the other hand, you can’t call it a teenage film per se. It’s a kind of coming of age film with an alternative twist. You could also call it a horror film with influences from werewolf films. But a “Wildling” actually belongs to a different kind of family of mythological creatures. And then there’s the moment Anna (Bel Powley) enters our civilization after years of isolation. She suddenly faces our way of behaving and living. Immediately I thought of films such as “Mama” and “Pete’s Dragon” where something similar happened. Add to this the hunting scenes in a wooded area and you can immediately conclude that this film cannot be classified directly under one specific genre. In that respect, it can already be called unique.

Let me first praise some elements of this movie. I found the choice of youthful actresses playing Anna amazingly successful. Aviva Winick, Arlo Mertz and Bel Powley each play a different period in Anna’s life. There wasn’t one moment that I thought there was something wrong with the appearance of Anna. They fit perfectly in the timeline. Subsequently, the transformation Anna underwent was well portrayed. Compliments for the make-up department. And finally a pat on the back for Brad Dourif who plays Daddy wonderfully, the person who takes care of and educates Anna in a sealed room. Still, strange I didn’t immediately recognize Brad Dourif. His role as Wormtongue from “The Lord of the Rings” is nevertheless engraved in my memory. How he can display so many emotions in that limited span of time is simply genius. Unfortunately, I found the ultimate role of him in the entire story less convincing.

But as usual, you’ll find a number of improbabilities in addition to the positive points. Not that “Wildling” drops to a miserably bad level, but it bothered me a little bit. The intro of the film is simply beautiful. Mysterious, intriguing and shocking at the same time. You constantly wonder which direction it wants to go and what’s the ultimate objective. Is Anna a prisoner of a network of morbid perverts? Is the outside world uninhabitable as in so many apocalyptic films? Or is there an element of truth in the story Anna hears for years already about the “Wildling“? And when Daddy starts giving injections, it’s really puzzling. And then there comes that turning point. An event I had questions about. During the film, you’ll see that the person Daddy was an experienced hunter. Well, this is probably the first time that he simply misses his target.

It also seemed unlikely that Anna, after being isolated from the outside world for many years without any interaction with other individuals, adapted so quickly. Wasn’t it better for such a unique person to be protected from the surrounding world? How is it possible Anna could go to a public school without any problem. A hostile environment, full of unknown emotions. I can imagine that this is very confusing for her. Let alone to let her go to a party with deafening booming music and liters of alcohol. She struggles like a fish on dry land. Another laughable moment was when Ellen (Liv Tyler) deposited a pack of sanitary pads in front of Anna. I suppose Anna had no idea what it was and what it was for. By the way, I also had trouble recognizing Liv Tyler immediately (also a “Lord of the Rings” participant). Maybe I miss her fairytale kind of appearance. Or her beauty starts to fade. But that’s a different kind of reverie from me. And finally, I thought Daddy’s final action during the hunt was terribly exaggerated. How he managed that (you’ll know what I’m talking about when you see it), remains a mystery to me.

“Wildling” is a strange but special flick.

“Wildling” certainly isn’t a bad movie. But in hindsight, it’s all rather blurry and superficial. Not that an extensive and detailed explanation is necessary. But I expected some more background information about the origin of these mythical creatures. Maybe it’s also because the film aims at too many genres. The fairytale mixes with horror elements and then transforms effortlessly into drama. “Wildling” can easily be added to other nature documentaries about animal species threatened with extinction. Never thought of seeing this concept in a soft-horror fantasy story. If there’s one thing this film succeeded in with flying colors, it’s the idiosyncratic use of the well-known werewolf concept. In short, a strange but special film.