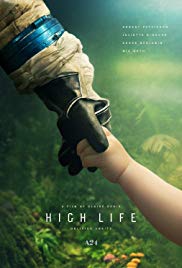 A father and his daughter struggle to survive in deep space where they live in isolation.

It would have been easy.

First you, then me.

The film “High Life” is just as meaningful as the expedition for which those sentenced to death have registered voluntarily. Not very meaningful. I do understand why they have chosen for it. The choice of sitting in a cell and staring emptily into space until the end of days. Or a space journey for many years with a black hole as a final destination from which they will try to produce energy. No wonder they prefer freedom, albeit to a limited extent, than to die in a cell. However, being on board of this ship isn’t exactly fun and quite boring. I’m convinced most of them already regret the fact they volunteered. I’m also surprised that these serious criminals haven’t killed each other yet after a certain period. Most likely out of boredom. Even the footage isn’t something to get excited about. And some of these volunteers are also extremely irritating. In short, I won’t use the words captivating, fascinating and the film title in one and the same sentence.

I’m sure that fans of arty SF films will get excited while watching “High Life“. And when a philosophical message has been incorporated in it, I’m sure there will be others who’ll sit in front of the screen, gasping excitedly. Unfortunately, it also had a sleep-inducing effect on me. It also gave me a feeling of hope. Such hope many visitors of the statue of Mary in Lourdes will envy me for. And that’s the hope for a surprising turn or an action-rich incident that would give the storyline a sudden boost in terms of drama and excitement. Forget it. The story progressed reluctantly without deviating from its boring course and the content remained fairly empty. A bit like this spaceship that moved on steadily deep into infinite and empty outer space.

All respect for Robert Pattinson.

A few words of sincere admiration for Robert Pattinson though. This young actor, better known for his cooperation in the whole “Twilight” saga (something I hate passionately), tries to break away with this notorious past in his own way. After his contribution to “The Last City of Z“, where he was practically unrecognizable thanks to his immense, rough beard, and “The Rover“, he again tries to play an unusual role in a non-commercial film. However, you can’t really call this role brilliant since his character is fairly silent and withdrawn. Even though that shaved para-command hairstyle suggests he’s someone with a short fuse. The beginning of the film shows him as a caring father who takes care of his baby daughter on an apparently abandoned space ship. It’s only after flashbacks that we find out what happened during this suicide mission.

The opposite of Monte you’ll get to know in the person of the fairly crazy and slightly aggressive scientist Dibs (Juliette “The 33” Binoche). Her presence transforms this space journey into an experimental trip. She certainly wouldn’t have been out of place as a camp doctor in a concentration camp during the Second World War. The crew is used as human guinea pigs to optimize the reproduction process. How she gets a satisfactory result later in the film, is too bizarre to believe. However, after you’ve seen her erotic act, that takes place in a dark room (where the crew members can fulfill their sexual fantasies), it’s not so surprising that she used that controversial method. That steamy erotically charged scene reminded me of the game “Virtual Valerie” for the Macintosh, one way or another.

Not for the average moviegoer.

All the time I had this feeling as if I was watching an unfinished end product. A paper-thin idea around which a very artistic-looking film was embroidered. However, it’s nothing more than a psychological study of conflicts between people in an enclosed space and the way in which their survival instinct emerges. Erotic scenes alternate with fairly violent events. And in between, many moments of reveries and soundless aesthetically pleasing film moments. “High Life” is not a film for the average moviegoer. For that, it’s doing a little too much to be arty. It’s not easy to follow and also ends with a non-explanatory final scene. What remains is one conclusion and one unresolved question. First of all a deep bow for Robert Pattinson who has grown as an actor and distances himself from his adolescent audience. And the pressing question that remains: could someone explain to me scientifically why it is that the corpses which Monte throws out the ship, actually fall down? That’s something that intrigues me.