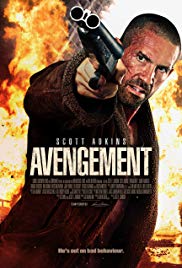 After years of assaults on him in prison, Cain escapes for avengement on those responsible.

So…prison turned you into a stone-cold killer, did it?

You and my brother did.

I’ve just seen the Philippine revenge film “Maria” in which a beautiful woman beats up everyone she encounters. And before I know it, the next one presents itself already. This time it’s a flick from the UK and from a completely different level. Not only the story itself is acceptable. Also, the endless series of fight scenes will bring fans of action movies into ecstasy. Scott Adkins is a man with brutal force who crushes his opponents without mercy with his hammer blows. So expect a large amount of splattering blood, shattered bones, cracked skulls and wisdom teeth flying around. In other words, “Avengement” is a very brutal movie.

At first, I expected something similar like “We still kill the old way” or “Legend“. An English crime/action film full of violence but with that English politeness still present in the background. Well, that doesn’t apply to “Avengement”. Every kind of courtesy is being crushed into the ground here. You can compare it with “Brawl in cell block 99“, but on English soil. This film is a relief when you compare it to all the digitally created violence Hollywood produces lately. In this film, the physical prevails a bit more. When looking at Disney and Hollywood violence, you’d give a “wow” cry. With “Avengement” it’s rather an “ouch” cry. The physical violence is so realistic, you sometimes can feel the pain yourself. And not only Adkins’ opponents moan noisily. He too suffers and regularly has to take hits.

Not only does Adkins needs to show how extreme anger runs through Cain’s veins. That’s about 90% of the total playing time. You’ll also see how normal and fair Cain is at the start of the movie. A decent man who begs his brother to help him with the idea to start a gym. The transformation, however, is frightening when he’s in jail for a while. A punishment he got when a job he had to do for his brother went terribly wrong. It’s there that the fairly well-behaved Cain is slowly turning into a cruel hot-head. The constant attempts of fellow prisoners to kill him one way or the other ensures that he trains and practices every day. These confrontations are already very brutal and cruel. It’s also here that he gets metallic teeth. When he finally ends up in a private pub, Cain is a scarred man. Both internally and externally. The only thing that interests Cain is revenge.

Who the hell is Scott Adkins?

To be honest, I didn’t know who Scott Adkins was in the first place. Completely unknown to me. Well, mega-fans of action movies will probably turn their nose up at me. And I admit that I don’t understand how it’s possible that I didn’t know this tough Englishman yet. For all I care, he can safely join “The Expendables” next time. He certainly won’t look out of place next to Statham and Van Damme. He certainly isn’t a person you want to bump into at night. That’s for sure. Not only does Adkins show in this film that he masters the necessary fighting techniques, but for once I didn’t have the impression that the I-wait-patiently-for-my-turn-to-be-beaten-up principle was applied here. A method that’s usually used in such action films. You’ll see someone waiting patiently on the side who, as soon as a colleague sticks to the wall, quickly takes his place. Something that nerves me immensely every time it’s used.

“Avengement” certainly isn’t a first-class film and won’t win loads of film prizes. Maybe using flashbacks isn’t something that will get you excited. Me neither. But if you just want to enjoy a raw, extremely violent revenge film, then this is really suitable for you. I certainly enjoyed it intensely. Just watch the trailer, and you’ll agree instantly.