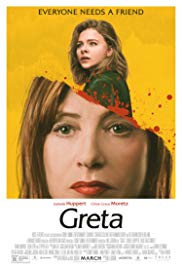 A young woman befriends a lonely widow who's harboring a dark and deadly agenda toward her.

I have been in this well of loneliness, this black hole.

Maybe it drove me a little mad.

We were meant for love, Frances,

not this terrible isolation.

If you see the film “Greta” pass by on your favorite streaming platform or on some VOD network service, it’s certainly not a bad choice to fill up an hour and a half of your spare time. The film itself is certainly not groundbreaking or breathtakingly innovative. This Hitchcock-like thriller provides temporary entertainment. And the only thing you’ll remember of it is the acting. Unfortunately, an important clue is given away very early at the beginning of the film, making it extremely clear which direction it’s going to go.

Let me get straight to the point. Isabelle Huppert is simply fantastic as Greta. A friendly-looking widow, living somewhere in New York in a lovely little house stuck between apartments, who spends her lonely days with everyday things. Her husband has died and her daughter is studying at a conservatory in France. The other main role is taken in by Chloë Grace Moretz. She plays Frances. A young adult who works as a waitress in a chic restaurant and leads a carefree life together with her best friend Erica (Maika Monroe). She’s an adorable girl and sincere. And just like Greta, she has to deal with the sorrow of a loss. Her mother died of cancer the year before.

It all starts with Frances finding a handbag on the metro. Since she’s as honest as the day is long, she decides to return this precious item to the rightful owner. Despite the loud protest from her friend Erica (“Okay, this is Manhattan. You find a bag, you call bomb squad“) who would rather pay for a wellness weekend with the money found in it. However, Frances doesn’t realize that she will soon end up in a spiral of psychological intimidation and outright stalking. A maddening, unlivable situation that will convince her that when she comes across such a handbag once again, she’ll kick it in the Upper Bay. It starts as a close friendship between two soulmates. And that includes going for a walk together, getting a dog and doing some cooking. Afterward, it seems to be nothing more than a charade. A scenario sprouted from the mad brain of Greta.

It’s the acting of both actresses that lifts this film just above average. The storyline, on the other hand, isn’t of the same level. In terms of style, it’s not too original and the film follows the laid path made by several films from the past. Even the attempt, in the end, to send you off in the wrong direction, wasn’t clever enough. So don’t expect a thriller that can be compared with “Single white female” for instance. You’ll witness a psychological joust between the two main characters. It’s brilliant to see how such a lovely, old lady can turn into an ice-cold, crazy and sadistic woman. And this with the same facial expressions. For that alone, it’s worth giving this average film a chance.