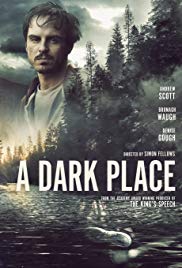 When a young boy goes missing in a sleepy backwoods town, a local sanitation truck driver, Donald, plays detective, embarking on a precarious and obsessive investigation.

Getting the job done the easy way,
is like running away from the problem.
Because dealing with the problem is…
It takes hard work.

I have a preference for the more unknown movies that are released weekly. The indie film world is lively and inexhaustible. The sad thing is that there’s also a lot of crap to work through. And then you come across such a film as “A dark place” (Original title “Steel Country“). It doesn’t have a subject that’ll blow you away or impress you the very first instance. You expect the same, routinely story as told in countless other films. But as the film progressed, I became more overwhelmed and excited. And this because of (unknown to me) actor Andrew Scott. My sense of shame increased by the minute while I admired his acting performance. How the hell is it possible that I didn’t know this actor? If you think that Dustin Hoffman is fabulous as Tom Cruise’s autistic brother in “Rain Man“, I’m sure you’re going to appreciate Andrew Scott’s interpretation as the mentally retarded Donald Devlin. Equivalent and Oscarworthy are two words that immediately come to my mind. A moving and at the same time inspiring character. At the same time, the film was also fascinating enough and the guesswork continued until the end.

Once and a while I write that a film is a must-see. This time it’s mandatory to watch this movie. And especially (I can’t emphasize it more) because of the actor Andrew Scott. Reward this guy with all sorts of prizes and hopefully, he’ll get offered other movies that reach a wider audience. In any case, I have viewed his filmography and will certainly view more work from his oeuvre.

PS. Don’t confuse this film with the movie that has the same name, starring Luke Baines.