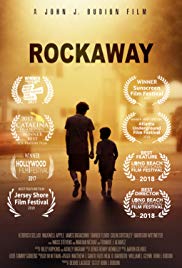 Inspired by true events, a man recounts the summer of '94, when he and his brother plotted revenge against their abusive father.

Who will protect you?

“Rockaway” is an uncomplicated low-budget coming-of-age story that focuses on child abuse and a plan to escape from it. In general, it’s not such a bad movie. It doesn’t pretend to be any better than an average television film. A kind of Goonies, but not with a treasure map of One-Eyed Willy, but a paper with an inventively worked out sketch that shows how they can eliminate the aggressive father. When Anthony (Keidrich Sellati) and his younger brother John (Maxwell Apple) accidentally meet up with a group of other young kids, a friendship bond develops and the two boys end up in a happier world than they had known until then. No, the film wasn’t really bad. Only the performances of the gang of kids was sometimes a bit bumpy. And the end was a bit too corny and artificial. With the right bag of chips and a matching drink, this film is quite enjoyable on a Saturday night!